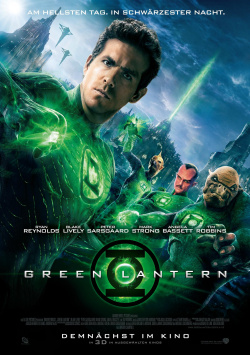 2011 has been one hell of a year for lovers of superhero and comic book adaptations. Be it the X-Men, Thor or Captain America, the flood of such movies just doesn't seem to subside. Now, Green Lantern, once again a representative of the DC universe, which also includes Superman and Batman, is coming to our cinemas. With Ryan Reynolds, the film is perfectly cast, but except for a few nice effects, the cinema appearance of this over 70 year old character can not really convince.

In the universe there are countless dangers, of which we humans do not suspect the slightest. To protect all the inhabitants of the myriad worlds, there has been a select unit for many centuries, equipped with special powers to ensure that peace and justice prevail. This unit is the Green Lantern Corps. It is not possible to apply to become a Green Lantern. You are meant to be - whether you want to be or not. When the powerful and thoroughly evil Parallax declares war on the Green Lantern Corps and kills one of the strongest fighters, a new Green Lantern is recruited. And this time, a human of all people is chosen: test pilot Hal Jordan (Ryan Reynolds). Though he's not really comfortable with his new assignment, and there's little faith in the human from the other members of the Corps either, it seems only with Hal that it's possible to stop Parallax before he can take power over the entire universe.

The greatest compliment that can be paid to Green Lantern is also its greatest weakness. The fact that the film's comic book origins are far more apparent than was the case with, say, Thor or Iron Man should please fans of the original. Director Martin Campbell (Casino Royale, The Mask of Zorro) and his team have created a colorful fantasy adventure that tries to entertain with comic book-like effects and designs. The problem here, however, is that much of what may look and work well in a comic book simply comes across as trashy or unintentionally comical in a live-action film. This is especially evident with the character of Hector Hammond, played by Peter Sarsgaard, who, after coming into contact with particles of Parallax, mutates into a dangerous and literally stubborn adversary of Hal. However, even though Sarsgaard played the role with obvious fun, Hammond never really comes across as threatening, just ridiculous.

The design of Oa, the world of the Green Lantern Corps, isn't bad, but just seems too artificial and too obviously computer generated to really transport the viewer to another world. It's to the creators' credit that they wanted to live up to the expectations of comic book fans. But at the same time they missed the opportunity to create something special that also appeals to those fantasy fans who are not familiar with the DC universe.

The biggest plus point of the film is not the 3D effect, which only really comes into play in a few moments, but lead actor Ryan Reynolds, who does his best to convince as a superhero with the perfect mixture of self-irony and seriousness. While Gossip Girl Blake Lively, who last had the chance to prove that she can really act in Ben Affleck's The Town, is burned here as an attractive accessory, Reynolds can convince in every scene, no matter how silly. So it's not because of the character Green Lantern himself that the movie doesn't really want to work, but because of the weak script and the visually too effortful comic book-like realization.

A few good action sequences especially at the beginning and at the end of the movie at least give Green Lantern enough entertainment value to justify a visit to the cinema for fans of the comic book character. And it becomes clear that there is some potential in this very special universe that future films (despite the financial failure, a sequel is actually planned) may be able to better exploit. But in the end, Green Lantern is not a shining hero saga, but rather a weak beacon that could be blown out quite quickly by the mass of much better representatives of the genre. Therefore: only for fans worth seeing!