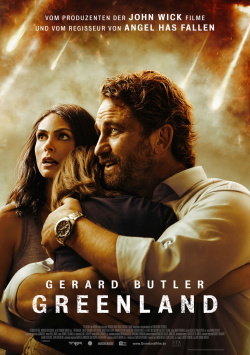 When a giant comet approaches Earth, the planet is supposed to be in no danger. But then engineer John Garrity (Gerard Butler) receives a call from the U.S. government telling him to immediately join his wife Allison (Morena Baccarin) and son Nathan (Roger Dale Floyd) at a military base, from where they will be taken to a secret bunker. Any doubts John might have are promptly quashed when a piece of the comet hits Earth and instead of crashing into the ocean as planned, destroys Florida. The small family sets off in a panic and make it to the military base despite considerable opposition. But not only are they not allowed to fly to the bunker in Greenland after all due to their son's diabetes. The three are then separated in the panic. And now a race against time begins for them, because a large part of the comet races towards the earth and threatens to destroy all life.

"Greenland" finally brings some real blockbuster feeling to the cinemas. Unfortunately, they were closed shortly after the theatrical release. At least it is supposed to continue after the reopening - and until then the film can be seen at the drive-in. Director Ric Roman Waugh, who previously directed the action film "Angel has fallen" with lead actor Gerard Butler, delivers a very solid and entertaining disaster thriller here that gives its audience exactly what to expect from such a film. Sure, there are countless clichés. Sure, John and Allison's marriage is on the rocks. Of course the son is sick and loses his medication throughout the story. And of course - despite enormous time pressures - all the family conflicts are resolved in the rush to the life-saving bunker.

Yeah, the script really isn't the film's greatest strength. But somehow that only stands out to a limited extent. Because the production presses fortunately almost always on the pace that one could not be annoyed at all about the dialogues or the dramaturgy. That this doesn't always succeed was shown, for example, by the disaster film "San Andreas": Here, too, there was a dramatic race against time for a broken couple - in this case, to save their daughter's life - and in the middle of it, the two take 5 minutes to really talk things out. While there are similar moments in "Greenland", the whole thing is resolved a bit better here, as it's more fast-paced.

For a film like "Greenland", you can't ask too much for logic or even expect dramaturgical depth. But if you just want to be entertained well, enjoy entertaining popcorn cinema with some good (but also some rather average) effects and just want to switch off for two hours, this is absolutely right. A successful representative of its genre and therefore also quite clearly: worth seeing!

Cinema trailer for the movie "Greenland (USA 2020)"
Loading the player ...