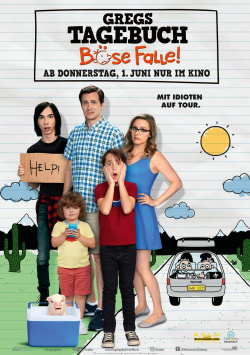 Greg Heffley (Jason Drucker) has a real problem again: after an accident in the ball pool, he is known everywhere only as Diaper Hand. He desperately needs to do something to make this disgrace go away. A video with the coolest YouTube gamer could be the salvation for his image. When he emails his idol, he gets an invitation from him to a games convention that is very close to where his grandma lives, which his family was planning to visit anyway. So Greg quickly comes up with an ingenious plan. But it's soon thwarted by his overprotective mother (Alicia Silverstone), his terror brother Rodrick (Charlie Wright), and the myriad of blunders Greg puts his foot in during the trip to visit his grandma. So will Greg be diaper-hand forever?

Greg's diary is a true phenomenon. Jeff Kinney's books have sold over 75 million copies to date and have been translated into 37 languages. Various merchandising products and of course the first two film adaptations were also real hits. And since the actors quickly outgrew their roles, not only the children but also the adults were completely recast for part 4. At first glance, not much else has changed: Greg stumbles from one faux pas into the next, has to be terrorized by his brother Rodrick, which of course his parents do not notice, because they believe to be particularly good parenting methods on the day, but which are actually an absolute catastrophe.

Greg's Diary - Evil Trap thus offers not much new. And the old familiar is also not presented very charmingly. If just the first film could still with some pleasantly clever ideas and hintersinnigen gags over the flatter moments consolation, succeeds the fourth rehash hardly. Too often the film uses the fecal humor so popular with children to achieve a really lasting effect. In other respects, too, the humour is primarily served up with a sledgehammer - just like the oh-so-important message that is smacked around your ears at the end.

It's a shame that the potential of the popular book template is used so little here Because whenever a few original or cheeky moments flash up, they are almost completely covered up by the many very simple-minded wee-wee and fart jokes. The over-the-top acting of the adult cast also makes for some real extraneous moments that keep clouding the enjoyment of this children's comedy. However, it must also be said: The children who were present at the press screening enjoyed the film very much and as much as it torments you as an adult, you also have to say: that's actually the main thing. Still, Greg's Diary - Evil Trap is not a good children's movie. So if you don't just want the little ones to be able to laugh heartily, but also want to offer them a bit of ambition or quality, you'd better give them the books to browse through. Only conditionally worth seeing!