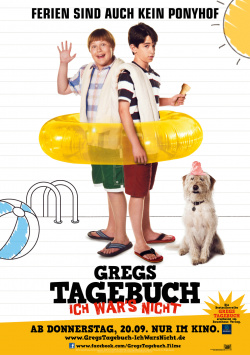 Greg's Diary: I Didn't Do It

Greg Heffley (Zachary Gordon) once again has many good reasons to fill his diary. Because although he had actually hoped to spend his summer vacation quietly playing video games and watching mindless TV, his father (Steve Zahn) has completely different plans for his filius: in order to spend more time together, Greg is supposed to take a summer job at the company where his father works. For Greg this is an absolute horror. And so he simply tells him he already has a job at a fine country club. His father is impressed, not suspecting that Greg is actually spending time at the club, but doing so as a guest of his best friend Rowley (Robert Capron). Here Greg can not only enjoy the sweet idleness, he also hopes for the opportunity to get closer to his beloved Holly (Peyton List), who is also a member of the club. But then his brother Rodrick (Devon Bostick) gets in his way and his life of luxury threatens to come to an abrupt end. But Greg isn't going to let his summer vacation be spoiled that easily.

Greg's diary is a true phenomenon. Jeff Kinney's books have sold over 75 million copies to date and have been translated into 37 languages. Various merchandising products and of course the first two film adaptations were also real hits. And since the actors quickly outgrew their roles, the third film, based on volumes 3 and 4 of the comic novels, was directed immediately after part 2. The comedy strictly follows the pattern that made its predecessors so popular: Greg stumbles from one faux pas into the next, has to be terrorized by his brother Rodrick, which of course his parents do not notice, because they believe to be particularly good parenting methods on the day, but which are actually an absolute catastrophe.

Greg's diary: I wasn`t offers so not much new. The small and big worries of teenagers are processed in an exaggeratedly funny way, which is sometimes pleasantly biting and funny, but often comes across as relatively silly. Too often the film uses the fecal humor so popular with children to achieve a really lasting effect. For an entertaining visit to the cinema this is just enough for the young Greg fans. However, the comedy does not have what it takes to become a children's movie classic. The potential for it would have been there, though. Not as clearly as in the first part, which could still show a lot more original ideas. But also in the third film flashes again and again clever and endearingly cheeky moments, which are unfortunately almost completely covered by the many rather simple-knit pee-pee and fart jokes.

But the small fans will freely only little bother. They get with Greg`s Diary: I Wasn`t exactly what they should expect from a Greg movie. The actors are in a good mood and have meanwhile visibly grown into their roles. So the whole thing is perhaps not quite as charming as the book and not quite as original and funny as it could have been. But this movie is a lot of fun for fans. And for that there is a: Worth seeing!