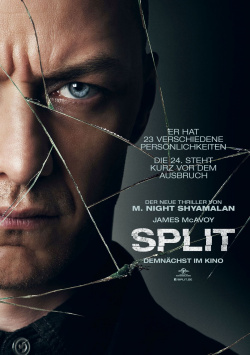 On their way home from a birthday party, girls Casey (Anya Taylor-Joy), Marcia (Jessica Sula) and Claire (Haley Lu Richardson) are kidnapped by a stranger (James McAvoy) and locked in a basement room. As it turns out, the man suffers from a personality disorder. A total of 23 different personalities inhabit him, from the manipulative Patricia to the young boy Hedwig. The girls are prophesied the arrival of a monster to whom they are to serve as victims. It is another of the man's previously hidden personalities that slowly but inexorably creeps to the surface. And there's little time for the girls to escape their prison before their captor's 24th personality gets the better of him.

With Split, director M. Night Shyamalan proves once again that despite a few crude flops, he shouldn't be written off just yet. Perhaps it's because he was given a mini-budget, more creative freedom, and the ability to focus more on the strengths that made his early films so successful that Split works so well for long stretches. Sure, this thriller never reaches the class of The sixth Sense or Unbreakable. But Shyamalan is clearly back on track. An oppressive atmosphere, a mysterious storyline with a haunting ending provide the suspense that The Happening or After Earth were so sorely lacking.

However, without its lead actor, Split probably wouldn't be half as good. James McAvoy's portrayal of the various personalities is just great. From amusing, endearingly naive, to completely deranged, calculating and downright terrifying, McAvoy offers virtually the full range of his skills. He only has to embody eight of the total 24 personalities, but he does so convincingly and versatilely that there is no doubt that he would have mastered the other sides of Kevin with flying colors as well. Even though the script has a few hangs and the film has minor lengths, James McAvoy alone is worth every penny of the movie ticket.

Shyamalan thrusts the protagonists, and by extension the audience, into their nightmare relatively quickly. Nevertheless, he then takes his time to build up the threatening atmosphere, which only culminates in something like horror and a little bit of action towards the end. Which brings us to the finale: M. Night Shyamalan is known for a big twist at the end that turns everything upside down. Strictly speaking, there is no such thing here. But he does have a surprise in store that many viewers probably won't understand at first. For those who understand what the director wants to imply with the last scene, the whole thing is a really successful and big surprise. This ending has a big advantage: For those who don't understand it, there is actually no disadvantage for the understanding of the movie. But those who do realize what Shyamalan is getting at will see some aspects of the story through slightly different eyes.

Split is truly not M. Night Shyamalan's best film - but it is guaranteed to be his best in ten years. Now, if he continues to focus on small, intense mystery thrillers like this one, and gets back to his old strengths even more, I guarantee we can look forward to some more good work from the filmmaker once hailed as Hollywood's wunderkind. Absolutely worth seeing!