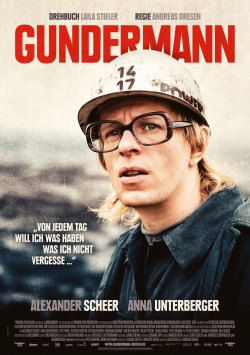 Gerhard Gundermann (Alexander Scheer) is an excavator driver in the Lausitz lignite mining industry. But he is also a songwriter who deals with everyday life in the GDR in his lyrics and is also quite critical of the regime. He is a family man and a rebel, a socialist and an oddball - but he is also an informer for the Stasi. After the Wall has fallen, this secret threatens to come to light. Gundermann must not only face his guilt, but also begins to question himself.

On different time levels Andreas Dresen tells in his biopic Gundermann from the life of a poet, a lateral thinker and rebel, who has spoken from the heart of many people with his music, but who has also shown through his work for the Stasi that life is not always black and white. There are many shades of grey - even in a person like Gerhard Gundermann, who you wouldn't have expected to have told the Stasi secrets about his colleagues. It's this multi-layered character, neither idealized nor demonized, that makes the film so successful.

The constant jumping back and forth between the different time levels is a bit confusing at the beginning, as it is only hinted at in a relatively subtle way rather than, say, by fading in the years. But as soon as it's clear that the story isn't told in a linear way, you can get completely involved in the multi-faceted events. This is carried by a very authentic visual language and an excellent Alexander Scheer, who disappears completely behind the figure of Gundermann. Not only outwardly, but also in the singing Scheer comes very close to the real role model.

Dresen manages the feat of convincingly mixing humour and drama, tracing a piece of rousing contemporary history that should still be so unknown to many, even if the name Gundermann should mean something to them. With more than two hours the whole thing is a bit too long, but all in all the film has become a stirring drama, which shows on the basis of a true story that people can't be pigeonholed as easily as one might think. A really good piece of German cinema and thus also quite clearly: worth seeing!

Cinema trailer for the movie "Gundermann (Deutschland 2018)"
Loading the player ...