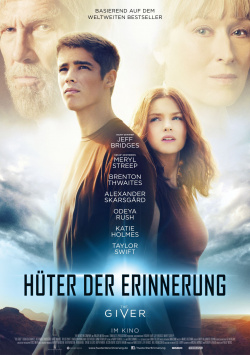 Guardian of Memory - The Giver

The world of the future seems to be an idyllic utopia. There are no more wars, no more violence, no more hatred, and no more ill will. People live peacefully together in a clearly structured society. But the price for this harmony is high: because there are not only no negative feelings. Even feelings like joy, love, lust and passion are alien to people. They do not see colors and do not know how beautiful tenderness can feel. In each generation, there is only one person who knows the whole truth about humanity's past and feels every form of sensation. Now, 16-year-old Jonas (Brenton Thwaites) is chosen to be the successor to the incumbent Keeper of Memory (Jeff Bridges). But what Jonas learns during his exciting training causes his faith in the society he grew up in to be shaken to its foundations. In order to save the people he lives with, Jonas makes a dangerous decision.

Although it may seem like Keeper of Memory - The Giver is simply riding the wave of success of the numerous Young Adult novel adaptations such as The Tribute to Panem, The Maze Runner, and Divergent - Destiny, the book on which the film is based is much older. Lois Lowry's best-selling book was published back in 1993 and has since also become a standard work in many schools, providing a great basis for discussion in ethics or philosophy. Director Phillip Noyce (Salt, The Patriot's Hour) may have smoothed out the interesting and multi-layered story a bit. Nevertheless, his film is still an exciting and moving vision of the future, which can convince not only dramaturgically, but also visually.

That the action is initially presented in black and white and only gradually creep colors into the picture, so you already know from the wonderful film Pleasantville with Tobey Maguire and Reese Witherspoon. Nevertheless, this stylistic device, especially in combination with the futuristic design of the world Jonas and his family live in, seems unspent and extremely atmospheric. When the first colors are used after about 15 minutes, it has a real goosebump effect that supports the emotional impact of the story very well and even enhances it a tiny bit.

Also, there is very little to criticize about this novel adaptation in terms of acting. Alongside seasoned stars like Jeff Bridges (who, as the rights holder for the film adaptation, also served as producer) and Meryl Streep, young actors Brenton Thwaites and Odeya Rush do pleasingly well. And that supporting actors like Katie Holmes or Alexander Skarsg&aring;rd remain rather pale, fits quite well with a society that seems to know no real feelings.

While some questions remain unanswered, such as why there actually has to be a Keeper of Memory in this future. Also, some plot elements could have done with a bit more depth, some parts of the story seem rushed after all. Nevertheless, this atmospheric vision of the future leaves a very positive overall impression. The story is told at a leisurely pace, but never feels boring. There is no big action or elaborate effects, but still the film is absolutely fascinating and extremely captivating, especially on a visual level. And even if the film, like the book, is aimed more at a youthful audience, you can still sympathize with Jonas as an older viewer.

In the end, the film lacks only the final kick, that certain something to make it great cinema. But even so Phillip Noyce succeeded in making a great futuristic adventure, which defies all its weaknesses with a nice story, convincing actors and strong pictures. And for that there is a deserved: Worth seeing!

Cinema trailer for the movie "Guardian of Memory - The Giver (USA 2014)"
Loading the player ...