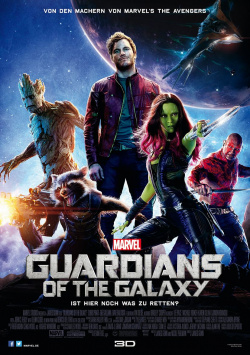 Guardians of the Galaxy

The comic book heroes from Marvel have always been a safe bet in the cinema in recent years. The heroes of the Avengers alone have been able to bring in over 1.5 billion dollars worldwide with their first cinematic adventure together. In the USA alone, the movies about Spider-Man, the X-Men, Iron Man and co. brought in over 6 billion dollars. Reason enough to milk this cow even further extensively. Nevertheless, it was in some ways a brave decision to send Guardians of the Galaxy with a mega-budget of 170 million dollars to the start. After all, it's not just that the comics are rather unknown to a wider audience compared to the X-Men or the Avengers. Also, the director James Gunn (Slither) hired for the film has not yet been able to show quite a big success. But Marvel trusted in Gunn and in the drawing power of the Guardians - a trust that was not disappointed. For Guardians of the Galaxy is not only a great comic book adaptation, but also one of the most entertaining, amusing and coolest sci-fi adventures of recent years.

After being kidnapped from Earth as a child, Peter Quill (Chris Pratt), aka Star Lord, wanders the galaxy as an outlaw adventurer, always on the lookout for precious relics that can be turned into cash. Too bad his latest acquisition is a mysterious superweapon that is the target of the ruthless Ronan (Lee Pace). And he wants to get hold of this weapon at any price and therefore opens the hunt for Peter. On his escape from Ronan's deadly henchmen, Peter is first captured and then, after a spectacular prison break, has to deal with a group of forced allies: the quick-tempered raccoon Rocket Racoon (voiced by Fahri Yardim in the German version), the tree-man Groot, the mysterious Gamora (Zoe Saldana) and the husky Drax the Destroyer (Dave Bautista). Although there is always friction between this fierce squad, it soon becomes clear that only together can they prevent Ronan from using the powerful weapon to take over the universe. The Guardians of the Galaxy are born!

The first trailer of Guardians of the Galaxy was very difficult to assess. While it did look like a lot of fun, it could have easily degenerated into completely over-the-top trash. However, the first few minutes make it clear that the film works really well. Because what follows after the very emotional introductory sequence is just great. Without giving too much away, it is fair to say that the character of Peter Quill could not have been introduced in a more amusing and cool way than with this wonderful scene. What James Gunn already does well with Star Lord, he manages to do very well with the rest of Guardians. It can definitely be considered a minor feat that Gunn and his team managed to bring a talking tree-man with a very limited vocabulary and a loud-mouthed raccoon to life in such a charming way that as a viewer you quickly forget that they were actually only created on the computer.

What works so well here is the perfect mix of anarchic humor and serious moments, of colorful fantasy comedy and gritty sci-fi adventure. At the same time, neither the story nor the characters are completely pushed to the wall by the great effects, nor does the whole thing degenerate into over-the-top slapstick. The movie is as funny as it is exciting, the action is great and the characters wonderfully fleshed out. Gunn has not only shown a very good hand with the casting of the Guardians. Michael Rooker as Peter's erstwhile mentor, Lee Pace (The Hobbit) as supervillain Ronan and a superbly evil Karen Gillan (Doctor Who) as his sidekick Nebula are also just great. And even smaller supporting roles could be perfectly cast with Oscar winner Glenn Close or Oscar nominees John C. Reilly and Djimon Hounsou.

You can tell from every second of Guardians of the Galaxy that James Gunn really loves this quirky troupe of intergalactic anti-heroes and that he wasn't just concerned with giving his audience some nice short-term entertainment with some great special effects. The fact that the film is a real passion project is already evident in the perfectly chosen soundtrack, which has great cult potential, just like the film itself. Here it becomes clear that Guardians of the Galaxy consists of many small gears that mesh perfectly and thus ensure that far more has been created here than just nice popcorn entertainment, which is already forgotten after the next comic book adaptation. Rather, James Gunn has succeeded in creating almost perfect entertainment cinema, which offers great pleasure on many different levels. And with Chris Pratt's Peter Quill, an extremely cool hero enters the sci-fi universe, who is not for nothing seen by many as the legitimate successor to Han Solo. What a great cinematic year for all fantasy/comic and sci-fi fans, which has clearly found a highlight with Guardians of the Galaxy. For that, of course, there's a: Absolutely worth seeing and definitely not to be missed!!!

Cinema trailer for the movie "Guardians of the Galaxy (USA 2014)"
Loading the player ...