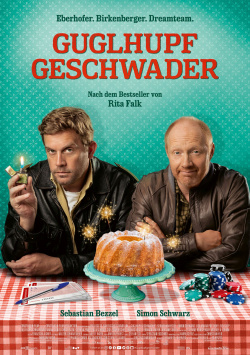 While the Eberhofer Franz (Sebastian Bezzel) is looking forward to his ten-year service anniversary, the rest of Niederkaltenkirchen is in lottery fever! Grandma Eberhofer (Enzi Fuchs) also invests a lot of money in lottery tickets. But she doesn't hit the jackpot, because the lotto operator (Johannes Berzl) prefers to pocket the money for himself and doesn't even book his customers' tickets. When his store is torched and his mother becomes a victim of the flames, it's clear that Lotto-Otto has messed with the wrong people. And while Franz has to deal with the constant quarrels in his family, a new, three-legged companion and a couples therapy imposed by Susi (Lisa Maria Potthoff), he also has to take a close look at mafia money collectors together with Rudi (Simon Schwartz). What a service anniversary!

"Guglhupfgeschwader" is the now eighth film adaptation of the popular Eberhofer crime novels by Rita Falk. Despite corona restrictions, the predecessor was able to continue the success story of the series and attract over 1 million visitors to theaters. And Part 8 is guaranteed to do similar numbers again. The film offers exactly what Eberhofer fans have come to expect: quirky characters, dry to bitterly wicked humor and a story that escalates into the absurd - although here, too, the actual criminal case is only part of the plot. Rather, it is the wonderful family quarrels, the once again offended Rudi or the capers of secondary characters such as audience favorite Flötzinger, which make this eighth part again a murderous fun.

Admit: After seven films, you can't expect too many surprises in an eighth installment. But it's to Stamm director Ed Herzog's credit that he always manages to vary the tried-and-true formula in such a way that the gags aren't ridden to death, but always work well. Strictly speaking, there are no real developments in the characters either, and yet it never seems like a standstill in the development of the characters. Thus, it remains believable why Susi stays with Franz - even though he has not left a foot out of the door in their relationship since the first part. The friendship between Franz and Rudi is similar. One may always wonder why the two men are actually friends - until moments like the final scene of this film provide a wonderful answer.

"Guglhupfgeschwader" is a genuine Eberhofer film from the first to the last minute. Those who liked the previous parts will also love this film. And if you can't do much with the humor, that won't change here either. For those who simply enjoy spending time in Niederkaltenkirchen and who appreciate the brash Bavarian humor of the best-selling film adaptations, a visit to the cinema can be warmly recommended - combined with the anticipation of Part 9, which is due in 2023. Pounding!

Cinema trailer for the movie "Guglhupfgeschwader (Deutschland 2022)"
Loading the player ...