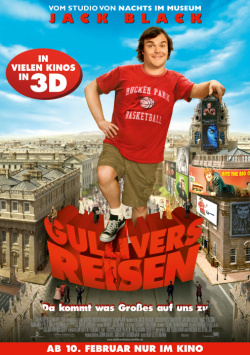 Gulliver's Travels - Something Great Is Coming

As early as 1726, Jonathan Swift (1667 - 1745) had written the story of "Gulliver's Travels". Several times the story has been adapted for television, cinema and theatre, sometimes as a cartoon, sometimes as a musical. Now a new, modern version is coming to our cinemas, which tries to score with brute humour and 3D effects.

Jack Black, who is also involved in the film as an executive producer, plays Lemuel Gulliver, a small-time clerk in the mailroom of a New York newspaper. In order to win the heart of his beloved, travel journalist Darcy (Amanda Peet), Gulliver rather unwillingly worms his way into an assignment to write about the legendary Bermuda Triangle. But his research trip catapults him not into Darcy's heart, but into the fantastical land of Lilliput. There, Gulliver is literally a giant who, after initial hostility, wins the respect and adoration of the people of Lilliput. For the first time in his life, Gulliver is someone others look up to. But when Gulliver gets too caught up in his new fame, exposing the people of Lilliput to great danger, the tide turns.

"Gulliver's Travels" is clearly aimed, at least in terms of its humor, at a very young audience, which is sure to be deliciously amused by the numerous infantile little jokes. When, for example, a brave Lilliputian soldier lands in Gulliver's backside or the giant pees out a fire (even if this idea cannot be blamed on the makers of this remake), then really only the simplest regions of the humour centre are stimulated. On the other hand, when Gulliver has his life story acted out by midget actors, using scenes from "Star Wars" or "Titanic" or enacting his very own version of "Guitar Hero", it's definitely good for a few genuine laughs.

Also, the deliberately over-the-top acting of Emily Blunt and many a little idea that happens on the side can be convincing. However, at the same moment, a lot of potential offered by the classic template, but also by the great acting ensemble, is completely squandered. Because with actors experienced in comedy like Jason Segel ("How I met your mother"), Chris O`Dowd ("The IT Crowd"), Billy Connolly or Catherine Tate, director Rob Letterman ("Monsters vs. Aliens") could have focused more on clever humor and subtle jokes. Instead, the action focuses too much on lead actor Jack Black, who virtually just delivers a best-of of his grimaces, dances and contortions. His fans will like that, but the fact that his inherently good co-stars are not given room for more varied comedy in his (literally) oversized shadow is just a shame.

So "Gulliver's Travels - Something big is coming" remains on balance a rather flat cinema fun for younger moviegoers or die-hard Jack Black fans. But if you're hoping for spectacular special effects, really good gags or a great 3D experience, you'll be bitterly disappointed for sure. Therefore: only conditionally worth seeing!

Cinema trailer for the movie "Gulliver's Travels - Something Great Is Coming (USA 2010)"
Loading the player ...