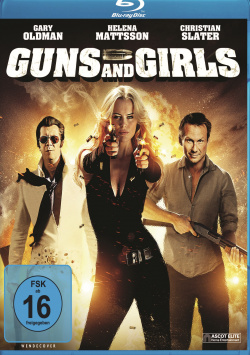 Movie: John Smith (Christian Slater) is just out of luck. First he got dumped by his girlfriend, failed an Elvis impersonator contest, and then he gets accused of stealing an antique war mask from the office of the Chief of the Apaches, in whose casino the contest was held. While John is chased by two cops (Dane Cook and Sam Trammell) and all sorts of bad guys, he tries to prove his innocence on his own. But time is running out as a stone-cold killer (Helena Mattson) takes out one Elvis impersonator after another. Together with young Cindy (Megan Park), John sets out to find the real thief and in the process uncovers the secret behind the mask...

Guns and Girls is a self-deprecating thriller-comedy that is clearly a child of the Tarantino era, but at the same time it's a little too cramped for originality. For instance, the numerous characters are introduced by freezing the image when they first appear and then having their names come flying into view in prominent letters. While this isn't exactly new, it works very well in the beginning. It's just that as time goes on, this effect gets a little overused and at best can only elicit a tired smile from the viewer.

That's exactly where the film's problem lies. In itself, the story is full of good ideas and the fact that the production and the actors themselves don't take themselves too seriously also adds a certain charm. However, Winnick simply offers the viewer too much of a good thing. As a result, the gags and the amusing quirkiness of the characters wear thin as the story progresses, which ultimately diminishes the film's entertainment value considerably.

Dennoch: Guns and Girls has some very amusing scenes to offer, which are enough to guarantee an enjoyable evening at home - provided you lower your expectations a bit. Gary Oldman in his unfortunately much too small role as a thieving Elvis impersonator, Helena Mattson (Species IV) as a sexy killer who likes to quote Edgar Allan Poe before she sends her victims to the afterlife or comedian Dane Cook and True Blood star Sam Trammell as somewhat overzealous sheriffs provide some genuinely successful moments, through which some weaknesses can be quickly forgotten. However, the positive aspects are not enough to call the comedy completely successful. The movie is quite amusing, light-footedly staged and apart from some minor hangs up to the finale very entertaining. However, the whole thing is nowhere near as original and quirky as it would like to be. And so the bottom line is: it's not a hit, but it's enough for 90 minutes of light entertainment. Who expects no special depth or clever dialogues on Tarantino level, which can risk here quite times a look!

Picture + sound: The picture and sound quality of the Blu-Ray is on a very good level. The picture is very clean and features a very pleasing color scheme. The overall sharpness is very well implemented, especially in the brighter outdoor scenes shot in the desert region of Utah, the presentation of smaller details, especially those in the background, reveals minor weak points here and there. Overall, though, there's as little to complain about here as there is with the sound. The action takes place mainly quite centrally, but also offers some well-implemented surround effects, which in the end result in a fairly coherent overall picture. Good!

Extras: Unfortunately, the only bonus on the Blu-ray is the trailer for the film.

Conclusion: Guns and Girls is a self-deprecating thriller that tries a little too hard for originality, but ends up looking too much like another Tarantino clone to really be considered an original work in its own right. However, the whole thing is amusing and entertaining in its own way, especially because the story and the actors themselves don't take themselves too seriously. On the Blu-Ray presents itself in good technical quality, but has no bonus material worth mentioning to offer. For lovers of not quite so demanding thriller comedies quite recommendable!