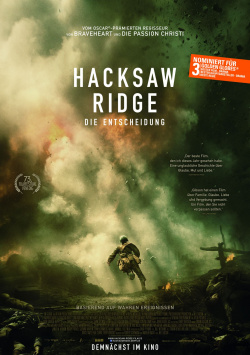 1945: Young Desmond Doss (Andrew Garfield) is in a moral dilemma. On the one hand, he wants to serve his country in World War II. On the other hand, violence and killing cannot be reconciled with his faith. With all his might, he fights to be allowed to go into battle without a weapon. In fact, he is granted this, which the other soldiers do not like at all. They see in Desmond a danger - but it soon turns out that exactly the opposite is the case. For during the merciless battle for the island of Okinawa, it is Desmond, of all people, who saves the lives of many chambermates without having fired a single shot.

With Hacksaw Ridge - The Decision, Mel Gibson makes an impressive return as a director after quite a few negative headlines. The hero epic based on a true story is admittedly not completely free of clichés staged. And in some moments there is also a fair amount of pathos. And yet Gibson's direction is so rousing and powerful that one is happy to overlook these weaknesses. Gibson knows how to build up a story like this in such a way that the audience is simply sucked in. The characters are tangible, which makes you sympathize with their fate. That's incredibly important in a story like this, as it's the emotional component that really makes it work.

If you were indifferent to the characters, then the flaws would become much more apparent. Some of the dialogue only works because of the strong actors and good direction. On paper, on the other hand, they sound arguably clichéd, which is true not only for the romantic scenes between Desmond and the love of his life, Dorothy. But the small script weaknesses are made insignificant by extremely sovereign acting. For instance, when Hugo Weaving makes a blazing plea for his son to go to war without a gun, it seems too thick, but works because of Weaving's stirring performance.

Rightly gripping, though, it all comes together at the Battle for Okinawa. Alright, you could argue that Gibson would have achieved the same effect without the extremely violent brutality in places. In some moments, Hacksaw Ridge - The Decision is even more shocking, merciless and brutal than the opening sequence of Saving Private Ryan. But even though a little less might have been more here, and even though in a few scenes you get the feeling that the fight was very obviously staged in a studio, you can't help but be captivated by the extreme tension of the story and literally pressed into the cinema seat. Here, Gibson does a first-rate job of making the most of everything at his disposal.

Hacksaw Ridge - The Decision is the story of a real hero who defied the horror of war and retained his humanity and faith even in the environment of the greatest cruelty. A very good film on almost all levels, with which Mel Gibson has finally once again proven his reputation as a filmmaker to be taken seriously! Absolutely worth seeing!

Cinema trailer for the movie "Hacksaw Ridge - The Decision (USA/Australien 2016)"
Loading the player ...