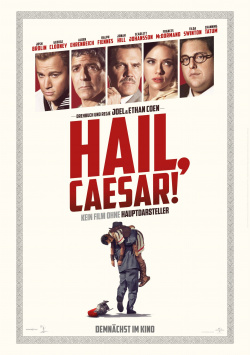 Hollywood in the early 1950s: Eddie Mannix (Josh Brolin) works as a problem solver for the big studio Capitol Pictures. When one of their starlets has revealing photos taken or one of the actors has had too much to drink again, Eddie is on hand to sort out the problem before the tabloids find out. But when Braid Whitlock (George Clooney), the studio's biggest star, is kidnapped in the midst of production on the costly biblical epic Hail, Caesar! and a large ransom is demanded, even a pro like Mannix might have a hard time keeping it quiet. The fact that he has to deal with an angry director (Ralph Fiennes) on the side, who despairs of having Western hero Hobie Dolye (Alden Ehrenreich) play the lead in his latest drama, in addition to preventing gossip reporters Thora and Thessaly Thacker (Tilda Swinton) from making public an old scandal involving Whitlock, doesn't make things any easier. A tempting offer of a new job, a pregnant actress, a group of communists and the eternal temptation to smoke again in defiance of his wife`s disappointed looks ensure that Mannix` skills are particularly challenged on this day.

With Hail, Caesar! Oscar winners Joel & Ethan Coen have directed a humorous homage to 1950s Hollywood cinema. With a great ensemble of actors they look behind the scenes of the dream factory and take the show circus of the vanities thereby properly on the joke. The whole thing turns out wonderfully biting here and there in the usual Coen manner, but always remains affectionate. The film is not meant to be a reckoning with the studio system, but a tongue-in-cheek declaration of love to the golden age of Hollywood. In the process, things get quite chaotic and in some moments the viewer wonders what the whole thing is about. But even if a deeper meaning does not necessarily open up, this comedy is a lot of fun for long stretches.

Because in some scenes the Coen brothers are truly at their best. For example, when Mannix wants representatives of different faiths to certify that Hail, Caesar! won't hurt the audience's religious feelings, it leads to a discourse between the representatives that is just too great. The same goes for the scene where a desperate director tries to teach the somewhat obtuse and marginally talented movie cowboy to speak an inherently simple sentence flawlessly into the camera. Such moments, coupled with the delightfully self-deprecating acting of George Clooney and two wonderful performances by Channing Tatum (including the best jump by a man onto a submarine in film history), easily console over a few rather tepid scenes.

When there's also a flash of enigmatic cleverness behind the gags, which occasionally border on slapstick, the film shows what genius it actually has inside. But it's exactly these moments that make sure that in the end, besides the feeling of being extremely well entertained, there's also a little bit of disappointment mixed in. Because they make it clear that Hail, Caesar! could have been much more than just an amusing comedy about Hollywood. But that is truly grumbling on a high level. Because in the end, the Coens deliver exactly what they so wonderfully celebrate here in their very own way: just under two hours of glorious escapism from reality with plenty of old Hollywood flair in a contemporary package. This is how cinema is fun - and that's why, with the smallest of point deductions, there is a more than deserved: Absolutely worth seeing!