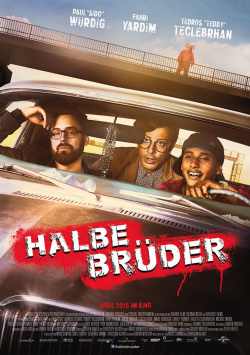 Julius (Paul Sido Würdig), a well-behaved family man with a penchant for conning people, the sheltered Yasin (Fahri Yardim) and the cheeky amateur rapper Addi (Tedros Teddy Teclebrhan) couldn't be more different. But when they meet at a notary's office, they learn that they have more in common than they might like. For the three are half-brothers whose common mother recently passed away. In order to get their inheritance, they would have to go on a kind of scavenger hunt together - especially for Julius this is a real horror. But his money worries are so enormous that he agrees to the road trip, which will take the disparate men from Berlin via Frankfurt and Cologne to the island of Fehmarn. Along the way, they find themselves from one turbulent situation to the next, putting not only their still-fresh family ties, but also their inheritance and even their lives in real danger...

There is no question that Christian Alvart is a very talented and versatile director. His internationally acclaimed thriller Antibodies, his enormously successful Til Schweiger Tatort episodes, his Hollywood production Fall 39, the sci-fi thriller Pandorum or most recently the successful excursion into the 60s with Banklady, Alvart has proven to have a good hand for atmosphere, suspense and great images even with weak scripts. With Halbe Brüder, Alvart now ventures for the first time into a comedy of the particularly turbulent kind. The film's craftsmanship is beyond reproach. The good camerawork, the quick cuts and the target-group-appropriate soundtrack make the comedy feel like a great motion picture in almost every scene - which is not a matter of course for a German production.

Not quite as convincing, on the other hand, is the screenplay by Doron Wisotzky (Schlussmacher), which relies too often on lowbrow gags and makes too little out of the funny initial idea. In many cases, the humor takes a lot of getting used to. The only hissing crook in a bunny costume is likely to divide audiences in this regard, as is the somewhat exhausting and only limitedly funny nature of Tedro's Teddy Teclebrhan. Sure, the actor and comedian has a steadily growing fan base. But his humor is already very special and can quickly become extremely annoying for some viewers. Fahri Yardim, who has already proven several times that he can be funny as well as act, sells himself short in many scenes, which is also due to the rather one-dimensional character drawing in the script. On the other hand, rapper Sido can leave a consistently positive impression, who not only reveals acting talent, but can make his role downright interesting through genuine sympathy values.

Whoever likes raunchy slash-and-burn humor, which often takes place in lower body regions, and who can laugh heartily at Tedro's Teddy Teclebrhan's very own style, will definitely have a lot of fun with Halbe Brüder. If, on the other hand, you were hoping for a comedy with a certain level of quality, and if you need more for a successful comedy than a successful visual realization and some amusing guest appearances, this road trip through Germany might drive you close to the edge of despair. That's why the bottom line is: worth seeing with reservations!

Cinema trailer for the movie "Half Brothers (Deutschland 2014)"
Loading the player ...