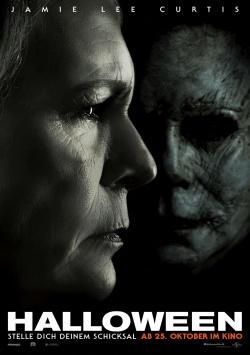 40 years have passed since Michael Meyers (Nick Castle) wreaked bloody carnage on Halloween in the tranquil town of Haddonfield. Since then, the killer has been in a locked institution, from which he is now to be transferred to a maximum security prison. Laurie Strode (Jamie Lee Curtis), the sole survivor of the Haddonfield murders, fears Michael will use the transfer to escape and kill her too. She has been preparing for this day for four decades. But when it actually comes as she predicted and the masked killer once again roams the town, it soon looks as if 40 years was not enough preparation for the battle against evil incarnate.

His new Halloween movie hitting theaters isn't really all that special given the numerous sequels and remakes of John Carpenter's original. And yet, this one is cause for celebration, especially for Carpenter fans. That's because director David Gordon Green and his co-writer Danny McBride decided to ignore all the parts made after the first film and make a direct sequel to the original, set exactly forty years after the events from Carpenter's slasher classic. Not with that exactly: they managed to get the master himself on board. He signed off on their story, produced the film, and - a real reason to cheer - composed the music as well.

Also, Jamie Lee Curtis was enlisted to reprise her role as Laurie Strode, as was Nick Castle, who at 70 has once again donned the mask of Michael Meyers. This sequel is also otherwise full of little allusions to the original - for instance, actress P.J. Soles, who played Laurie's girlfriend - makes a brief appearance as a teacher - as well as to the other films. But the film, of course, thrives not only on playing with nostalgia, but also on a very classic slasher production that deliberately opts against excessive brutality in the style of SAW and co. and instead relies on the elements that Carpenter used so masterfully forty years ago.

This may not always work. But overall, David Gordon Green has directed a really good horror film that is convincing both as an homage to one of the greatest exponents of the subject and as a sequel to a classic. An old-fashioned film in the best sense of the word, which proves that sometimes old brooms can still sweep really well. In view of the great success in the USA one can be curious whether this will really be the last Halloween film (at least with the character Michael Meyers), as John Carpenter has said several times. At least David Gordon Green and Danny McBride already have an idea how they could tell the story further. Absolutely worth seeing!

Cinema trailer for the movie "Halloween (USA 2018)"
Loading the player ...