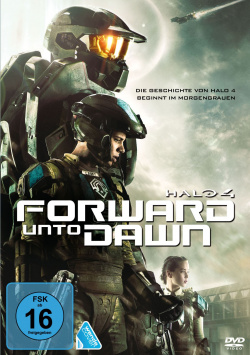 Content: In a distant future where humans have long since colonized other planets, a group of young cadets at Corbula Military Academy are being prepared to fight insurgent rebels. These have sparked a civil war that has spread across the galaxy over time. Among them is Thomas Lasky (Tom Green), whose mother and brother's achievements in the civil war have cast an outsized shadow from which Thomas struggles to emerge. He repeatedly clashes with superiors or the other cadets, finding it difficult to accept rules and authority. Only the recorded video messages of his brother and the affection of the young cadet Chyler (Anna Popplewell) give him the support he needs during this time to not give up his training. But all his doubts and his personal problems take a back seat when Corbula is attacked by aliens. Only a small group of cadets around Thomas survives the brutal invasion. Led by a mysterious super-soldier called the Master Chief, this small group must now make their way to safety in order to win the war against the invaders...

With a budget of just under $8.5 million, director Stewart Hendler was able to direct the internet series Halo 4: Forward unto Dawn in the wake of the release of the fourth Halo video game. Here he tells the backstory of Thomas Lasky, one of the characters from Halo 4. The whole thing, especially at the beginning, reminds a bit of a version of Starship Troopers that takes itself a bit too seriously, without its satirical bite and excessive depiction of violence. Especially in the first half of the film, in which the training of the young cadets at the academy, the conflicts within this group and the individual characters, especially Lasky, are introduced, the usual clichés reign. Thus, despite a respectable visual appearance, a little boredom arises, which is only dispelled with the attack of the aliens.

While the film is not a prime example of originality even then, it can make up for this shortcoming with a decent level of suspense and respectable action. Particularly positive is that the video game adaptation is in many moments their for the genre but comparatively low budget hardly visible. Hendler and his team really made the best out of the money they had in terms of computer effects, equipment and design. And with the exception of Anna Popplewell (The Chronicles of Narnia), the almost completely unknown cast do a very good job overall, given the rather thin script and clichéd dialogue.

Halo 4: Forward unto Dawn is certainly no revelation, but at least it's decent sci-fi entertainment that hints at what a great Halo cinematic adaptation could look like with the right budget. If you don't expect a big hit, know a little about the Halo universe and just want to be entertained for 90 minutes, this prequel to the videogame comes highly recommended!

Picture + Sound: The DVD's picture is very clean, with no picture distortions or smudges to be found. The color scheme seems a bit undercooled at times, but this fits well with the futuristic atmosphere of the film. The sharpness is on a good level and the contrasts underline the good overall impression. The sound is in a powerful Dolby Digital 5.1 mix, which comes up with some decent surround effects, especially in the last third. Good!

Extras: The DVD offers the inclined fan over 80 minutes of bonus material. It starts with thirteen short (each between 1:30 and 2 min.) Pre-Release Vignettes, in which among other things the individual characters introduce themselves in short video contributions to the viewer. These are followed by a recruitment video of the Corbulo Academy of Military Sciences (approx. 2 min.). Far more worth watching is the Behind the Scenes section. Here are ten featurettes with a total running time of over 55 minutes. Among them, interested HALO fans will find a good Making of (approx. 20 min.), short documentaries about the design (approx. 4 min.), the stunts (approx. 4 min.), the Master Chief's suit (approx. 4 min.), the costumes (approx. 3:30 min.) or about the special effects (approx. 3 min.). In all these documentaries it becomes clear how hard the makers have tried to meet the demands of the HALO fans.

An amusing Red vs. Blue PSA (approx. 3 min.) and trailers close the quite extensive additional offer. Worth seeing!

Conclusion:Halo 4: Forward unto Dawn takes a little while to get going. But then the film, which was originally conceived as a web series, proves to be absolutely solid science fiction entertainment with some nice show values and good action sequences that not only fans of the successful videogames series can enjoy. Despite quite a few clichés and a comparatively low budget, this is a sci-fi adventure worth watching, which presents itself on DVD in good picture and sound quality and with extras worth seeing. Recommended