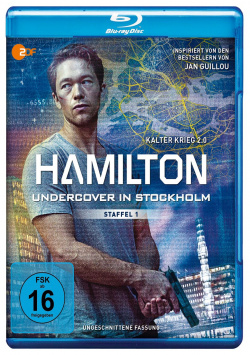 Content: Stockholm is rocked by bombings and cyber attacks. Kristin Ek (Nina Zanjani) and her team from the Swedish secret service SÄPO are working at full speed to track down the masterminds behind the attacks. In the process, she notices one mysterious man in particular, whom she herself saw at one of the crime scenes. As it turns out, he is Carl Hamilton (Jakob Oftebro) of OP-5, Sweden's military intelligence agency. Ek is assigned to work with him, which she doesn't take too kindly. Because to her, Hamilton is a suspect whose behavior doesn't exactly make him more trustworthy. But of course, the Navy Seal-trained agent doesn't let that stop him from solving the case. In the process, he encounters an international web of conspiracies that blur all lines between good and evil. Is Hamilton himself still on the right side?

After actors such as Stefan Sauk, Peter Stomare or most recently Mikael Persbrandt, Jakob Oftebro now slips into the role of agent Carl Hamilton, conceived by the Swedish bestselling author and journalist Jan Guillou. In his books about the agent, which have been filmed several times, Guillou has included his own experiences with the world of international espionage, which adds even more suspense to the thrillers. "Hamilton - Undercover in Stockholm" tells in ten episodes a very complex, yet always exciting story about an international conspiracy in which the secret services also seem to be involved. Not only for Kristin Ek, but also for the viewers, it is at first completely unclear what role the here still quite young Hamilton plays in the events. This is gradually revealed as well as what is behind the attacks on Stockholm.

The series takes its time to develop the plot, but also the characters. This is spiced up with international locations and exciting twists that keep you riveted until the end of the 10 episode season. There are a few minor lengths here and there, but these are cushioned by both the engaging atmosphere throughout, as well as the interesting characters and clever architecture of the story. Jakob Oftebro is convincing all along the line as the title character. He plays very undercooled and opaque, especially at the beginning, but he also lets other sides of his character shine through again and again. Bond or Bourne level he does not quite reach (yet), but in a league such as his colleague "Jack Ryan" he plays all the time.

Anyway, it can be said: If you especially liked the first season of the Amazon Prime series with John Krasinski, you will also appreciate "Hamilton - Undercover in Stockholm". It is a really exciting, lavishly produced and well-acted agent series that uses very current topics such as terrorism, fake news or xenophobia, without losing sight of the entertainment value. If you like entertaining thriller series on a high level, this first season can be warmly recommended: Worth seeing!

Picture + Sound: The image of the Blu-ray convinces with a very high overall sharpness, which has hardly any loss of quality even in darker scenes. Colors appear authentically matched and a pleasing depth of image can be detected in some outdoor scenes. There's really nothing to complain about here. The audio is available in either a good German dub, or the original multilingual audio. The latter soundtrack is harder to understand, but has the more realistic atmosphere. In both cases, the dialogues are powerfully mixed and some sound effects such as explosions or gunfire provide a pleasantly dynamic soundscape.

Extras: Bonus material is unfortunately not on the Blu-ray.

Conclusion: "Hamilton - Undercover in Stockholm" is a thrilling thriller series that is easily in a league with comparable productions such as Amazon's "Jack Ryan" adaptation. A gripping storyline, well-developed characters and engaging production make the 10 episodes of the first season fly by. The Blu-ray presents the series in very good picture and sound quality, but bonus material is missing. Nevertheless, there is here on balance quite clearly a: recommendable!