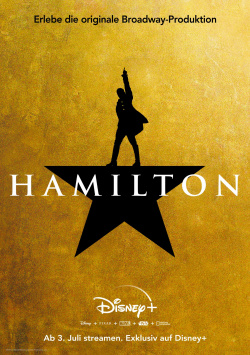 11 Tony Awards, 1 Grammy, the Pulitzer Prize - these are just some of the awards that the musical Hamilton by and with Lin-Manuel Miranda has been able to collect. Sales in the millions on Broadway, almost regularly sold-out performances and storms of enthusiasm wherever the play has been seen speak for themselves: Hamilton, the musical about the life of the American founding father Alexander Hamilton, is a sensation! And now viewers in Germany can finally see the musical, too, because the film version is now coming exclusively to Disney+. However, this is not a feature film, but a recording from Broadway. But it is, like the musical itself, something very special:

The recordings were made in June 2016 in the Richard Rodgers Theatre on Broadway and take the audience in a uniquely intimate way into the world of the Broadway show. Filming took place over four days. First during a live show with cameras in the audience. Then, close-ups and tracking shots were shot without an audience over two days, before another live show was captured with cameras from other angles. The result not only exudes Broadway atmosphere, but also takes the viewer right up close to the stage. In fact, the only better way to experience Hamilton is live.

Hamilton offers audiences a stirringly modern take on American history embedded in a mesmerizing mix of hip-hop, jazz, pop, R&B and classic musical. Inspired by the book Alexander Hamilton by Ron Chernow, author, composer, lyricist and lead actor Lin-Manuel Miranda has truly created a musical masterpiece here, which will also be seen in Germany, more specifically in Hamburg, next year. But this cinematic recording has a clear advantage: Here you can see the original cast, who played a not inconsiderable part in making the musical go through the roof like this.

You might now think that Hamilton is telling a story that doesn't work outside the US. Far from it. The electrifying songs and modern approach to conveying history make the musical an exciting, entertaining and not at all dry history lesson even for viewers who have never heard the name Alexander Hamilton before. Therefore, for this magnificently filmed Broadway recording, the following applies quite clearly: absolutely worth seeing!