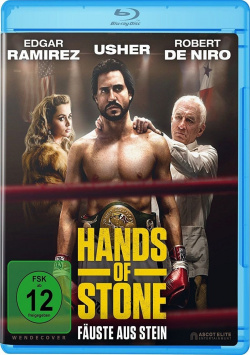 Film: Ray Arcel (Robert de Niro) is a legendary trainer who has helped many a boxer to the world champion title. Ray recognizes a good fighter when he sees him in front of him. And when he sees Roberto Durán (Edgar Ramirez) fight for the first time, he is sure: "This man has the potential to become a great boxer. Since he had trouble with the Mafia many years ago, Ray is not allowed to earn a cent with boxing anymore. Still, he wants to train Durán. Because he knows that the young man can write boxing history if he succeeds in restraining his fiery temperament. And in fact Durán sends his opponents in rows on the boards and is about to win the world championship, for which he has to defeat a living legend. Sugar Ray Leonard (Usher Raymond)…

"Hands of Stone" is a good boxer movie, which doesn't approach the class of similar current works like "Creed" or "Southpaw" dramaturgically, but which can be convincing in terms of acting and visuals. Director Jonathan Jakubowicz from Venezuela has found with the story of the legendary boxer Roberto Duran and his no less legendary trainer Ray Arcel an exciting and gripping theme, which is especially pleasing by the great main actors and the visual implementation. Not only the scenes in the boxing ring are optically well captured, but also the atmosphere of the different decades the story spans is very well captured.

Dramaturgically, however, the film has to struggle with some problems. Biopics are always a somewhat difficult undertaking if - as in this case - they do not concentrate on a short period of time, but cover a longer period of time. There is inevitably some quite superficial. What's more, the movie doesn't focus on one character, but strictly speaking on three. On Duran, on Arcel and sometimes also on Sugar Ray Leonard. That's just too much for a two-hour film.

There is a storyline around the daughter from Ray's first marriage. It doesn't matter for the actual story and if you had cut this part out completely, the movie wouldn't lack anything. On the contrary, he might have been a little more coherent in tempo and could have concentrated more on the legendary fights between Duran and Leonard. Nevertheless, "Hands of Stone" is a stirring portrait of one of the greatest boxers of all time over long distances - and that's why the bottom line is: absolutely worth seeing!

Picture + sound: The audiovisual realisation of the film for Blu-ray can be convincing in almost every respect. The image has a pleasant depth and good sharpness of detail. Also the harmonious colour mixture, which is adapted to the different decades, in which different scenes play, supports the very positive overall impression, which is not disturbed also in the darker moments by blurring or other weaknesses. The powerful sound is available in a lively DTS-HD MA mix, which is not only convincing in the scenes playing in the boxing ring. Very good.

Extras: As a bonus there is a 24-minute interview Making of, as well as a few edited scenes and the trailer for the film. Okay. Okay.

Fazit: "Hands of Stone" is the gripping portrait of a boxing legend who only has to struggle with the fact that the story sometimes concentrates on unimportant side scenes. Good actors and a visually stirring realisation make the film an entertaining pleasure for fans of gripping biopics and boxer films. The Blu-ray is technically convincing, the bonus material is a bit poor, but definitely worth seeing. All in all the following applies to this Blu-ray: Recommended!