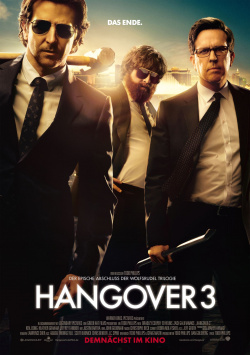 The Wolfpack is back to bring the Hangover trilogy to a close with an epic finale. After the second installment, director Todd Phillips faced mostly accusations that this sequel was really just a direct copy of the successful first, so he wanted to go in a slightly different direction for the third and final installment. And in some respects he succeeded.

So in Hangover 3 there is no wedding and no film tear, but still again plenty of chaos and destruction. After the death of Alan's (Zach Galifianakis) father Sid (Jeffrey Tambor), his mother feels completely overwhelmed by her son's eccentric antics. Therefore, Phil (Bradley Cooper), Stu (Ed Helms) and Doug (Justin Bartha) are supposed to drive him to a clinic where he should finally get his life under control with the help of medication and therapies. But on the way there, the four are kidnapped by crime boss Marshall (John Goodman). He is missing gold bars worth several million dollars and in his eyes the wolf pack is to blame for this misery. After all, it was their escapades in Las Vegas a few years ago that led to Mr. Chow (Ken Jeong) taking the gold from him. And since Chow just escaped from a Thai prison and nobody knows where he is, Stu, Phil and Alan are supposed to track him down and get the gold back, while Doug stays with Marshall as a hostage. In fact, the three manage to find the fugitive Chow in Mexico and find out where the gold is. But that, of course, is far from the end of this adventure, as the mayhem has only just begun.

The humor of Hangover 3 is much darker than it was in its over-the-top predecessors. Plus, at moments it almost feels more like a thriller than a comedy. This will definitely be difficult for some fans of the first two parts to get used to. What they expect, Phillips actually offers them only in the credits. There are many absurdities and comical tastelessnesses in the movie itself, which provide some good laughs. The short appearance of Melissa McCarthy (Bride Alarm) is a real highlight, as well as the fate of the poor giraffe Alan is riding on the highway at the beginning of the movie. But even though there are many funny scenes and numerous references to the first two parts, the overall tone just feels very different.

This works really well in some moments, but in other scenes it goes all to pieces. For instance, there's a reunion between Alan and the little boy he carried around as a baby in Part 1 and adorned with his oversized sunglasses. This scene is supposed to be a bit of an emotional climax. But because of what you know of Alan as a viewer, you expect him to do something inappropriate the whole time. A false sense of expectation not only ruins this moment, but also other inherently good scenes in the film.

Other than that, the flat, less successful gags and the really good laughs are about evenly balanced. Which is why the film can still leave a very positive overall impression are the actors. While Bradley Cooper and Ed Helms are not allowed to deliver as many good moments as in the predecessors, Zach Galifianakis is once again at his best. Especially his facial expressions and his very special body language give many gags that very special touch. Ken Jeong and his Mr. Chow, who plays a much bigger role here than in the first two films, will again divide opinions. While this character is an absolute cult for some fans, others are quickly annoyed by his shrill voice. A good balance offers John Goodman, who is just great as a brutal gangster.

Who expects from Hangover 3 a non-stop gag fireworks, which hits exactly in the same notch, as the first two films, could leave the cinema disappointed at the end. Who, on the other hand, is prepared for the fact that the wolf pack is much darker this time and the still completely exaggerated tastelessness is built into a solid thriller plot, can again have a lot of fun at this wacky finale. Not as good as the first, but clearly better than the second part. And for it there is then for fans also one: absolutely worth seeing!