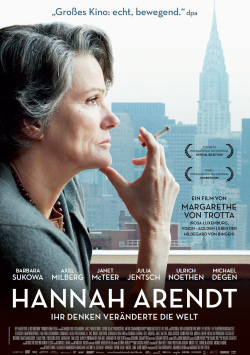 After telling From the Life of Hildegard von Bingen in their last collaboration, director Margarethe von Trotta and her leading actress Barbara Sukowa once again turn their attention to a strong, visionary woman in their latest collaboration: the political theorist and publicist Hannah Arendt. But rather than directing a comprehensive biopic that traces Hannah Arendt's very eventful life in great detail, von Trotta's portrait focuses on a very special period in this particular woman's life and work: her controversial coverage of the trial of Nazi criminal Adolf Eichmann.

Hannah Arendt - Her Thought Changed the World begins in New York in the early 1960s. Hannah Arendt (Barbara Sukowa), who has made a name for herself as a political theorist, lecturer and lateral thinker, offers to report for the prestigious magazine THE NEW YORKER on the trial of Nazi criminal Adolf Eichmann, who has been tracked down by Israeli intelligence in Argentina and brought to Israel. Her reports receive a great deal of attention. But the longer the trial goes on, the less the image of the monster that even Hannah had expected to see in Eichmann wants to match his actual appearance. And so she writes a thesis on the banality of evil, with which she turns Jews, colleagues and friends against her. But despite the enormous pressure and vicious hostility she now faces, Hannah Arendt sticks to her theses and beliefs, no matter how uncomfortable and painful they may be.

Hannah Arendt - Her Thought Changed the World is an extremely important film. Not because it rehashes significant historical events in a well-researched way. Nor because it is an engaging and superbly acted portrait of a strong and meaningful woman. Both are undoubtedly true of the film and make it absolutely worth watching for interested viewers. But the film takes on its special significance because it reveals an incapacity that our society has struggled with not only in the past, but especially in the present. In the reactions that Hannah Arendt received after the publication of her thesis regarding Adolf Eichmann, it becomes clear how difficult it is to have objective discussions about sensitive topics. Whether religion, migration problems, youth violence, there are also currently too many uncomfortable topics that are too often hushed up or only discussed unobjectively because of their emotional explosiveness. Whoever says the wrong thing in terms of political correctness is immediately attacked and defamed, regardless of whether his statements are essentially true and a factual discussion would be long overdue.

Even if Hannah Arendt can calm down some critical voices in the film with her great lecture at the end, not all could be convinced by her logical and factually correct explanations. The emotions were too stirred up, the ideologies and enemy images too entrenched to make new points of view at all possible. Even if the film has some lengths dramaturgically, exactly this aspect makes it enormously exciting, stirring and just important.

Handcrafted, the drama is solidly staged, but hardly stands out from similar works. It is the story, its message and the very good actors, first and foremost Barbara Sukowa of course, but also a wonderful Axel Milberg and Janet McTeer, who make Hannah Arendt - Ihr Denken veränderte die Welt a very good film that friends of high-quality biographical dramas from Germany should not miss. Worth seeing