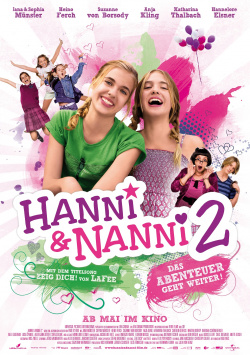 After the twins Hanni & Nanni, invented by Enid Blyton, celebrated a successful cinema debut almost two years ago with one million visitors, the sisters now return from their summer holidays to the boarding school Lindenhof. There is a lot of chaos at the moment, because money is missing everywhere. The popular hockey field has already had to make way for a flock of sheep and the menu doesn't look very attractive either. When headmistress Frau Theobald (Hannelore Elsner) is forced to travel abroad with the prospect of financial rescue, she hands over the reins of the school to French teacher Madame Bertoux (Katharina Thalbach) of all people, threatening to plunge life at Lindenhof into chaos once and for all. But these are not the only problems Hanni and Nanni (Jana and Sophia Münster) have to deal with this school year. Their annoying cousin Lilly, who has also come to the boarding school, a mysterious princess, the attractive nephew of Madame Bertoux and finally the marriage crisis of Georg (Heino Ferch) and Jule (Anja Kling) Sullivan keep the girls on their toes. That they are already in a great adventure around a planned kidnapping, the twins do not suspect yet...

Hanni & Nanni 2 should please all fans of the first part. The film is clearly aimed at young girls as its target audience. And they won't be bothered then by the things that might strike an adult viewer as negative. Therefore, this review could actually end right here. Nevertheless, I'd like to briefly give free rein to my views on this work, because it simply annoys me that German children's films in particular seem to place so little emphasis on quality and originality. The characters are laughably uninspired, which is especially true for the adult characters. Yes, kids might find it funny to see Katharina Thalbach, with her clichéd French accent and Mireille Mathieu memorial wig, put her foot in her mouth. And they will also be amused by the overly stupid acting kidnappers. But does the whole thing always have to be accompanied by funny music and exaggerated facial expressions? Can't children's humour be conveyed a little more subtly and intelligently?

But even worse is the moral message the film tries to convey. It is commendable when children's films deal with issues that actually concern the young target audience. Unemployment of the parents and divorce are just such topics and to address them is really not an aspect that has to be criticized. But when the whole thing is resolved in such a simple, unrealistic way, it's just mendacious and annoying. Surely, a movie like Hanni & Nanni 2 doesn't have to be very realistic and is supposed to be fun for children in the first place. But if a very serious topic is made the central part of the story, then the resolution should please not be presented in such a simplistic and unrealistic way. This really doesn't help affected children.

Lieblessly drawn characters, terribly shallow clichés and a story that is so predictable that really not a single moment of surprise can be made out, all this makes this sequel a truly unspeakable work that doesn't leave the German children's film in a good light. As I said, I realize that the film is not made for viewers like me and that little girls will probably really enjoy the twins' second cinematic adventure. But I firmly believe that the enjoyment would be much greater if the makers didn't just rely on crude gags and overdrawn characters. For me one of the worst movies of the year, but for the target audience probably still worth seeing somehow!