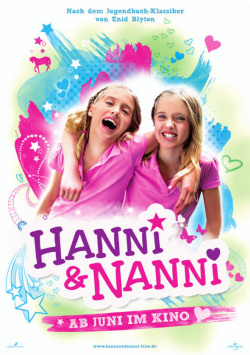 The Adventures of the Twins "Hanni & Nanni" are among the most successful and popular young adult book series ever. After over twenty volumes, 34 radio drama episodes and a Japanese anime series, Enid Blyton's classic is now coming to our cinemas in a heavily modernised version.

After a wild chase through a department store and an alleged theft, George (Heino Ferch) and Julie Sullivan (Anja Kling) see only one way out: their twin daughters Hanni (Sophia Münster) and Nanni (Jana Münster) are sent to boarding school "Lindenhof", the school where Julie already learned her most important life lessons. But especially the rebellious Hanni has problems to adapt to the rules of the school and thus also makes life difficult for her sister. But after a while, the sisters even manage to make some new friends - until the "Lindenhof" hockey team is pitted against the JoCats, Hanni and Nanni's old school team...

To be sure, the 2010 version of "Hanni & Nanni" has only the name in common with the old stories Enid Blyton dreamed up. But before this is construed as a negative criticism, it should be noted that even the German version of Blyton's books differed drastically from the original. Thus, St. Clare boarding school became Lindenhof, Pat and Isabel became Hanni and Nanni, and the strict 1940s became the somewhat more open-minded 1960s. In addition, whole passages were rewritten or omitted that were too "british" for German readers. Enid Blyton herself only wrote five books based around the twins, the other volumes published in Germany were commissioned works by the German publisher. Given this less than squeamish treatment of the source material, it is entirely appropriate to subject the boarding school stories to a drastic modernization in the new version as well.

The film is clearly aimed at a target audience consisting of 10 to 13 year old girls, who will surely have a lot of fun with the "girls are cool and all boys and adults are goofy" mentality of the story. And this target audience will care very little that "Hanni & Nanni" is not a particularly good movie upon closer inspection. The humor is often extremely flat (best example is the guest appearance of Oliver Pocher), the attempt to make "Lindenhof" a kind of German Hogwarts and to cast Hannelore Elsner as a female Dumbledore, so to speak, does not work at all and the fact that the two leading actresses are making their acting debut here is unfortunately also still very noticeable in many places.

But are these really arguments that count? For mothers who accompany their children to the cinema in the hope of reliving a piece of their own childhood or youth here, certainly. Because the charm of the old books and radio plays has been almost completely lost. For new "Hanni & Nanni" fans, however, none of that matters. The groovy soundtrack, cool heroines, and kid-friendly gags are sure to make the popular twins quite a hit in theaters as well