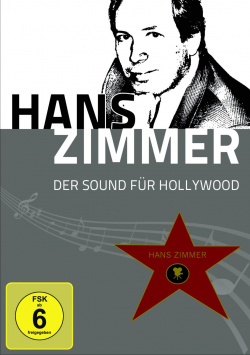 Content: Whether you like his music or not, there is probably no question that Hans Zimmer is one of the most successful and influential composers of contemporary film music. Few styles are as often copied as the one Zimmer has used to musically enhance numerous blockbusters such as the Pirates of the Caribbean films, Gladiator and The Lion King. A look at Zimmer's oeuvre to date, however, shows that he can't really be pinned down to one particular style, that he's always evolving and reinventing himself. His work for The Ring, The Dark Knight, Der Schmale Grad or Besser geht's nicht are just some of the testimonies to this thesis. Winner of multiple awards, highly sought after by filmmakers, Hans Zimmer has truly made it. His success story is now illuminated in a documentary that is not only exciting for lovers of film music.

Hans Zimmer: The Sound for Hollywood is, however, more than just a biography of the exceptional composer. Of course, the first half of the documentary in particular focuses on Zimmer's life. From his childhood and youth in a small town in the Taunus near Frankfurt am Main, his difficulties with the German school system, which eventually led him to a school in London, where his musical talent was nurtured. From his first musical successes with the song Video kills the Radio-Star, his first attempts in the field of film music and finally his breakthrough in Hollywood with the soundtrack to Rain Man, a work with which Zimmer is dissatisfied to this day.

But besides the biographical part, the film also offers a good insight into the working methods of the musician, looks into his studio and lets composers working for him speak. It becomes clear that it is certainly not easy to work for and with Hans Zimmer. Because if he doesn't get exactly what he has in mind, he can sometimes get a little loud. But since he only surrounds himself with people who share his passion and also speak his language, the language of music, his collaborators are also able to cope with his manner, which he himself describes as dictatorial at times.

Hans Zimmer: The Sound for Hollywood is a most interesting documentary, in which some of the directors Zimmer has worked for also have their say and talk about the dedication and obsession with which the Oscar winner pursues his work. It's nice to see a film score composer profiled in depth for once, rather than actors or directors. Absolutely worth seeing!

Image + Sound: The newer interviews present themselves in good image and sound quality. With older footage are slight cutbacks to make, but overall, the technical implementation is on a very good level for documentaries.

Extras: Almost two hours of interviews has to offer the DVD as bonus material. Particularly interesting are the more detailed conversations with Zimmer himself, who talks about his work here again for almost 45 minutes. Good!

Conclusion: Hans Zimmer: Sound for Hollywood offers an interesting insight into the life and work of one of the most successful and important film composers of today. In addition to the nearly 50-minute documentary, the DVD has nearly two hours of in-depth interviews to offer interested viewers an even deeper dive into the subject matter. Absolutely recommendable