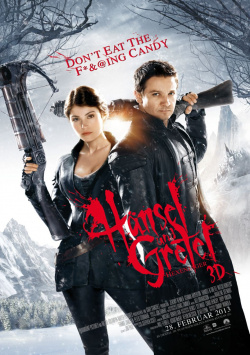 Once upon a time, long ago, two children wandered through a dark forest, abandoned by their parents, until they came across a gingerbread house. Probably everyone knows the story of the siblings Hansel and Gretel, which ends with the fiery death of the witch in her own oven. But what happens to the two of them? What became of Hansel and Gretel when they grew up? Director Tommy Wirkola (Dead Snow) knows the truth, which he now shares with his viewers in his latest film Hansel and Gretel: Witch Hunters.

Years after the events at the Gingerbread House, Hansel (Jeremy Renner) and Gretel (Gemma Arterton) continue to hunt witches. Wherever witches are up to mischief, the siblings mercilessly make sure they are put to death. When several children are kidnapped in a town, the siblings quickly realize that it must be the work of a witch. And indeed, the cruel Muriel (Famke Janssen) is behind the disappearance of the children, with whom she wants to put a particularly terrible plan into action. Of course Hansel and Gretel want to stop her. But they are not only a lot of bloodthirsty witches, but also the ruthless Sheriff Berringer (Peter Stormare) in the way. For professional witch hunters like Hansel and Gretel, the whole thing should still be a piece of cake. But as is often the case, things turn out differently than planned.

For Hansel and Gretel: Witch Hunters, Tommy Wirkola returned to the fairy tale's origins, shooting his horror-comedy entirely on location in Germany, as well as at the legendary Babelsberg studios. Nevertheless, fairy tale purists will hardly enjoy this bloody witch hunt, as there is very little of a fairy tale atmosphere to be felt here. Blood splatters by the gallon, limbs fly, and people are crushed and dismembered for all they're worth - and all of that in beautiful 3D! The whole thing is completely over the top and should never be taken seriously for a second. Because only, who sees the whole thing as a completely wacky fun movie, will be well entertained by this Grimm battle platter.

There are some moments in which the overdone, very macabre humor also works very well and provides for some really good laughs. Jeremy Renner makes a pretty debonair Hansel, while Bond girl Gemma Arterton cuts a damn fine figure as the paint and leather Gretel. When the two of them go into battle against powerful witches armed only with their weapons and cool sayings, it's not just the eye that's entertained. But unfortunately Tommy Wirkola always tries too hard to be extremely cool. And in such moments his horror-fantasy-comedy isn't funny, but rather unintentionally funny. This is especially true for a certain Edward (no, not the sparkly vampire), who is probably supposed to be a great sympathetic figure in the truest sense of the word, but unfortunately is nothing more than an unconvincingly animated joke.

Hansel and Gretel: Witch Hunters definitely has potential. The set is well done, the action sequences well staged, the splatter interludes nicely gory but comic-bookish enough to still warrant a FSK 16 release. But a nice look and macabre humor do not make a good film. A good script would have been necessary as well. And there, unfortunately, Wirkola didn't do the best possible job. His characters remain absolutely one-dimensional, the story offers only few surprises besides numerous holes in logic and the dialogues are just plain hilarious, especially in the few more serious moments. If you can completely shut down your brain and just want to be offered an amusing horror tale for the eye, you'll definitely be entertained. Everyone else, however, will wish that Hansel and Gretel had not only put the witch in the oven, but this film as well. Therefore: Nice and fun, but nowhere near as good as the witty initial idea would lead one to hope!