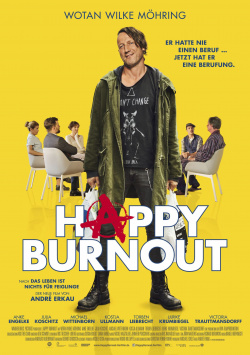 Alt-Punk Fussel (Wotan Wilke Möhring) actually rejects everything that corresponds to any conventions. He is a life artist with body and soul and draws Hartz IV felt since there is this social benefit. But that could be the end of it now. Because his case worker at the tax office (Victoria Trautmansdorff), whom he has skillfully wrapped around his finger like so many women, can no longer find any excuses to extend his benefits. His only option: he could have himself diagnosed with burnout. However, that would mean he would have to be admitted to a hospital as an inpatient. Reluctantly, Fussel agrees, because the only other alternative was work. And so Fussel ends up in a clinic full of burnt-out people, whom he really upsets with his maladjusted manner. When the head of the clinic (Ulrike Krumbiegel) finds out about him, he is threatened with expulsion - unless Fussel agrees to a very unconventional deal.

Following the acclaimed drama Das Leben ist nichts für Feiglinge (Life is not for cowards), director Andr&eacute; Erkau and lead actor Wotan Wilke Möhring have teamed up again to bring another story penned by Gernot Gricksch to the screen. Neither the story of Happy Burnout nor Möhring's role could be more different from its predecessor. With a lot of humor and lightness, the story only scratches at serious topics. In the foreground here is the pleasure that the viewer should have in this story. And this is offered very effectively, especially at the beginning.

When it is shown, for example, with which tricks lint gets women into bed or how he scrounges through everyday life with a lot of charm and audacity, then this provides for some really amusing moments. This is also due to the fact that you can tell that Wotan Wilke Möhring had a lot of fun playing this anarchic role. As soon as Fussel with his unconventional way turns the clinic everyday life in the smart sanatorium, in which he does not want to fit at all, upside down, the confrontation with people, who are snatched from the normality of our society for other reasons, also provides for many very successful and also funny scenes.

Naturally, the story at some point takes on something very absurd, almost fairy tale-like traits, but this is completely okay. The fine ensemble cast that Möhring has at his side can make up for some of the more implausible moments, as well as many an overused cliché. For about 80 minutes, it all works really well and offers entertaining entertainment, in which there is actually little to criticize. The last act, however, is just too much. The dramaturgy here becomes just too predictable and is too overdone to achieve the effect the script obviously aimed for.

However - and the film can definitely benefit from this at the end - most of the characters already own the audience's sympathies at this point, which is why there is still enough pleasure in watching them even in this rather weak moment. So in the end, Happy Burnout may not be quite the big hit, but it's an enjoyable comedy with great actors and some very nice touches all the same. Worth seeing