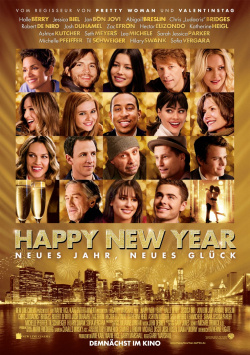 After the quite respectable success of his ensemble comedy Valentine's Day, despite lukewarm reviews, Pretty Woman director Garry Marshall has now grabbed the next holiday to once again gather an attractive ensemble of stars big and small in front of his camera for a romantic and comedic round dance. Happy New Year - New Year, New Happiness is often totally thick, cheesy and dripping with clichés. And yet, it's all a lot of fun and just plain beautiful!

It's New Year's Eve in New York. The new year is upon us, and with it, lots of changes. For instance, Laura (Katherine Heigl), owner of a thriving catering business, is trying to forget the love of her life, rock star Jensen (Jon Bon Jovi), which isn't exactly easy since he's the star guest at the New Year's Eve party she's working for this year. Ingrid (Michelle Pfeiffer), who just quit her job, tries to work off all her perpetually postponed resolutions in just one day with the help of young courier Paul (Zac Efron). And both Tess and Griffin (Jessica Biel and Seth Meyers) and Grace and James (Sarah Paulson and Til Schweiger) want their offspring to be the first baby of the new year, which could make the happy parents plenty of money. And while these couples wait for new life, Stan (Robert De Niro) has only a few hours left before death takes him. He just wants to live long enough to see the big crystal ball lowered in Times Square at midnight one last time.

Randy (Ashton Kutcher), on the other hand, can't do much with all the New Year's Eve hoopla. He'd prefer to spend the evening all alone in his apartment. But then he gets stuck in the elevator with his new neighbor Elise (Lea Michele, Glee) and a very special New Year's Eve begins for the two. Sam (Josh Duhamel), who met a very special woman at a New Year's Eve party a year ago, is hoping for the same. He hopes to meet her again this year - and never have to let her go. Not letting go is single parent Kim (Sarah Jessica Parker)'s 15-year-old daughter Hailey (Abigail Breslin), who would much rather celebrate the new year with her friends than her mother. For all of these people, this night holds many more surprises that promise a lot of new things for the coming year.

Happy New Year follows the same scheme that has worked very well for movies like Indeed.Love and quite neatly for Valentine's Day. A few loosely connected stories are woven together into an entertaining whole, with love, forgiveness, hope and new beginnings always seeming to be the central themes. So it's no surprise then that Happy New Year can't really surprise and makes use of sheer countless clichés. But somehow this doesn't really bother in this case. The viewer gets exactly what can be expected from a romantic feel-good movie. Although the dosage is a bit high at times, in the end the movie leaves you with just a slight feeling of emotional oversaturation.

At times, the ensemble piece feels like a showcase for the stars, precisely because many an actor only makes a fairly brief appearance. That's why the actors, although there are several award-winning names like Robert de Niro, Halle Berry or Hilary Swank on the cast list, only seldom manage to really prove their talent. But for most of the people involved this doesn't seem to have been that important. They had fun working on the film, which is sometimes very obvious. This good mood is then also transferred to the inclined viewer, who can discover in the midst of the many clichés then also some very nice and really funny moments, but also the one or other moving scene.

Yes, Happy New Year is pure Hollywood. Subtly, the morally valuable messages of friendship, family, forgiveness and goodness are truly not conveyed. But sometimes it's nice to be able to dive uninhibitedly into kitsch and only have to come up for a languorous exhale every now and then. Happy New Year doesn't come close to Actually.Love, my personal favorite of the romantic ensemble comedy, to be sure. But this unofficial sequel to Valentine's Day is definitely better than its predecessor. Therefore, if you like Hollywood kitsch, are hopelessly romantic, and want to be entertained by actors who enjoy playing, you should definitely say goodbye to 2011 with this movie and slide into 2012. Worth seeing