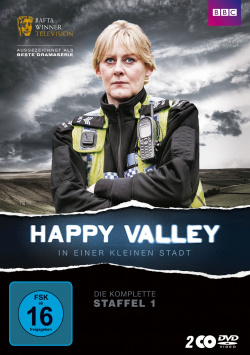 Content: Catherine Canwood (Sarah Lancashire) is confronted with drugs, abuse and juvenile delinquency on a daily basis in her day job as a police officer in a small West Yorkshire town. She tries to counter the misery with a healthy mix of empathy and sarcasm. She also has her own demons to contend with, having still not come to terms with her daughter's suicide. Her marriage has broken down, as has her relationship with her son. Now Catherine lives together with her grandson Ryan at her sister Clare's (Siobhan Finneran) and tries to master her life as good as she can. This works quite well, until the day Catherine learns that Tommy Lee Royce (James Norton), whom she blames for her daughter's suicide, has been released from prison. It's clear to the cop that the young man is evil to the core and he's going to hurt more women until someone finally stops him. And she is to be proved right, as Tommy Lee becomes one of the masterminds behind the kidnapping of young Ann Gallagher (Charlie Murphy) shortly after his release. For Catherine, there is now only one goal: to find Tommy Lee and his accomplices and rescue the girl before worse happens.

Renowned TV writer Sally Wainwright has undoubtedly created one of the best crime series in recent memory with Happy Valley. It's clear from the first two episodes that Catherine Canwood is easily in the same league as Luther and other high profile crime writers. Buoyed by a very gritty atmosphere infused with oppressive realism, Wainwright not only builds an enormously suspenseful crime story that spans six rousing episodes. She also creates very exciting and multi-layered characters, often blurring the line between good and evil. Here, everyone has their demons, their dark sides. At the same time, however, characters like Tommy Lee Royce are drawn to be more than a typical villain.

Even the motives of Kevin, played by The League of Gentlemen comedian Steve Pemberton, are in some ways understandable, making the small-time clerk a truly tragic figure. Through Kevin, it also becomes dramatically clear how one bad decision can negatively affect or even destroy the lives of several people at once - even if that wasn't the intention of the person who made it. By refraining from the black-and-white painting usually so readily employed in crime thrillers, the series maintains its enormous tension, even though the production often takes a lot of time for long dialogues and quiet moments.

Happy Valley has some very intense moments to offer, which don't necessarily make this series a casual after-work pleasure. There should be a certain soft spot for dark material to be able to enjoy the story with all its facets - even if now and then even a little bit of dry humor or sarcasm flashes through. But for those who enjoy quality thriller dramas that are not just about the case, but also about the people involved in it, this excellent first season is not to be missed. Absolutely worth watching!

Picture + Sound: The picture reproduces the dreary, rather gloomy atmosphere of the crime dramas well through a coherent, somewhat reduced and undercooled color scheme. The image sharpness is especially in the brighter scenes on a good TV level, in the darker scenes, however, here and there some minor blurring and minimal image noise can be detected. The sound, which is available in stereo, lets the dialogues sound clear and well understandable from the home theater boxes and also the rather restrained soundtrack provides a very coherent atmosphere. Good!

Extras: Apart from some programme tips, the double DVD unfortunately has no extras to offer.

Conclusion: Happy Valley is an extremely exciting crime series from the UK that captivates with a cleverly constructed story, interestingly drawn characters and a gritty atmosphere throughout. Although the series is consistently grating and it is not a real pleasure in the classic sense to watch the six episodes of the first season, in the end you are left with the realisation that Happy Valley is one of the best genre series the UK currently has to offer. If you like things a little darker and very suspenseful, you can't go past this double DVD - even if there is no bonus material worth mentioning. Absolutely recommendable