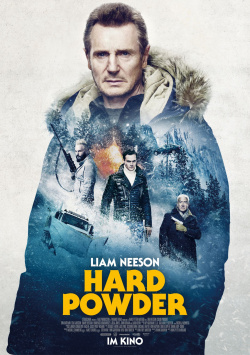 Snowplow driver Nels Coxman (Liam Neeson) is a man you can count on. The residents of a small village in the Rocky Mountains, who have just voted the quiet family man Citizen of the Year, know this too. But the days of quiet Nels always playing by the rules responsibly are abruptly over when his son Kyle is killed by the henchmen of ruthless drug lord Trevor 'Viking' Calcote (Tom Bateman). Nels is out for revenge and he sets out to find the man responsible for his son's death. In doing so, he sparks a gang war between Viking and the rival drug mafia, led by White Bull (Tom Jackson). And soon the snow that Nils has so carefully cleared out of the way until now turns blood red.

With Hard Powder, Norwegian director Hans Petter Moland presents a successful U.S. remake of his own film One by One. Apart from a few minor changes, this version sticks closely to the original. Of course, this leads to the fact that viewers who know the original will hardly be offered anything new here. For them, this second rehash is unnecessary, which doesn't make the film bad at all. For Moland not only succeeds in building up a moody-macabre atmosphere even in the remake. He was also able to transfer the deep black humor of the original into the American language, from which the film can benefit all along the line.

Because instead of another typical Liam Neeson revenge thriller, the audience is offered an extremely entertaining, deliciously bitter, but at the same time quite exciting film that mixes comedy, thriller and drama in a wonderfully curious way. Admittedly, this is a bit unconventional, but that's what makes the story so appealing. If you can get involved and have a slight inclination towards the macabre, you'll get your money's worth. Because once Nels in his justice mania really gets going, it is not exactly squeamish to the point - but just sometimes so overdone hefty that it is already funny again.

Hard Powder may not be able to gain any new facets from the original, but is still a really sound remake. Hans Petter Moland's slightly different take on grief recovery and vigilante justice manages to impress with good actors, engaging imagery and his black humour. In addition, despite many humorous moments, there is still enough dramaturgical depth that prevents the film from being simply flat or striking. For this, there is clearly a: Absolutely worth seeing!