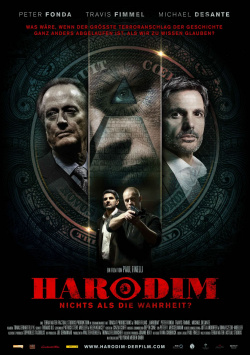 Harodim - Nothing but the Truth

For years, ex-Navy SEAL Lazarus Fell (Travis Fimmel) has been preparing his plan. Now, finally, the time has come to carry it out. After faking his own death and going underground, Lazarus has tracked down and intensely watched the terrorist (Michael Desante) he blames for the death of his father Solomon (Peter Fonda). Solomon Fell died in the attacks on the World Trade Center and now the terrorist is supposed to pay for it. After Lazarus succeeds in taking the internationally wanted man into his custody and dragging him off to his hideout, he begins an intense interrogation, at the end of which Nothing but the Truth is supposed to stand. But this truth might not please Lazarus.

After the script for Harodim - Nothing but the Truth found no takers in the US, as it was simply too hot and too controversial for all the producers there, director Paul Finelli had to move to Austria to realize his thriller. There arose a very ambitious project, which mixes documentary elements with a chamber play thriller to a somewhat exhausting, but extremely interesting whole. Exhausting because the numerous clips from news broadcasts are presented in very fast cuts and are sometimes only visible for a few fractions of a second. This veritable flood of images in combination with fast camera pans and an intense sound design just seem a bit too much of a good thing at times, even if the mixture of game scenes and real content does have its appeal.

As far as the content of the thriller goes, it is extremely important for the makers to make it clear that the story is pure fiction. The point here is not to set up another conspiracy theory, even though one might initially get exactly that impression. Rather, director Finelli wants to show that there are always several sides to an alleged truth, that facts can be easily manipulated, and that viewers should not accept the news - whether on TV, the Internet, or in newspapers - unfiltered at face value, but should also question it sometimes.

By showing two men who both firmly believe they are victims and who accordingly thirst for justice, with at least one party's foundation of conviction shaking mightily in the course of the interrogation, Harodim - Nothing but the Truth tries to make it comprehensible that there is no such thing as a single truth, that there are always at least two points of view and that this makes it enormously difficult to distinguish clearly between right and wrong, good and evil or truth and lies. The film manages to make you think, even if some of the theories presented here overshoot the mark a bit and make the whole thing seem a bit harebrained in terms of content.

Who can get involved with the sometimes somewhat unwieldy production that takes some getting used to and can focus more on the interesting message behind the whole thing and not on the sometimes somewhat absurd-sounding theories, this small, ambitious thriller can definitely be recommended to. Because even if not everything makes sense and especially the big twist towards the end is a bit disappointing, it is still very exciting to question some facts that are considered to be the truth and to have heated discussions about the theories of the movie. And for that there is a deserved: Worth seeing!

Cinema trailer for the movie "Harodim - Nothing but the Truth (Österreich 2012)"
Loading the player ...