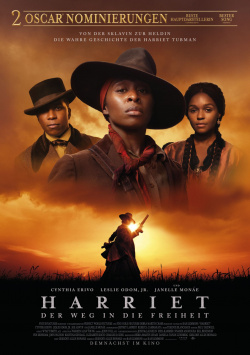 Harriet - The Road to Freedom

In the mid-19th century, young Harriet Tubman (Cynthia Erivo) manages to escape from slavery. Although she makes it to safety and could live a relatively comfortable life from then on, Harriet decides to return to the place that caused her so much pain and suffering in order to free her family from oppression as well. Her courage, willpower and also ingenuity impress the members of the Underground Railroad relief organization, which Harriet helps from then on to free many more slaves. The true story of this legendary freedom fighter is now told in the drama Harriet - The Road to Freedom.

Director Kasi Lemmons tries to create a cinematic memorial to the selfless struggle of this great woman. She succeeds quite well because she has found a really strong leading actress in Cynthia Erivo, who carries the film even through its weaker passages. These weaknesses don't refer to the story, because it's really strong. After the movie you definitely want to know a lot more about Harriet Tubman and her life. In this respect, this biopic does everything right.

No, the weaknesses of Harriet - The Road to Freedom lie more in the staging, which has turned out arguably conventional and uses a little too much of the moral sledgehammer to convey the very important message. A more intense storytelling and at the same time a touch more subtlety - be it in camera angles or in character drawing - would have been desirable here. No question, Harriet - The Way to Freedom is a good film that tells an important and highly exciting story about a fascinating woman - a woman who should definitely be even better known outside the USA than she is. Still, because the execution lacks standout elements, the film rarely succeeds in unleashing the emotional force that is actually inherent in the story.

In times when more and more people are raising their voices against racism and taking to the streets, it is important to see how long this struggle has been fought, especially in the US, and that there are people who put personal commitment to freedom and equality above their own lives. Yet - and this is the most important achievement of this film - the story doesn't spread hate at the end (even if it makes you angry, of course), but hope. And that is something we still desperately need today! For this there is then also - despite the quite existing weaknesses - a clear: Absolutely worth seeing!

Cinema trailer for the movie "Harriet - The Road to Freedom (USA 2019)"
Loading the player ...