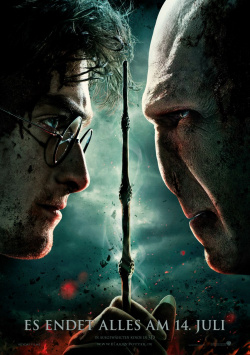 After ten years, it is now time to say goodbye. Because with Harry Potter and the Deathly Hallows - Part 2 comes the definitely last part around the adventures of the wizard student in our cinemas. After the successful book series already ended in 2007, the cinema Harry remained with the fans for more than three years. But now it's finally over! But before the collective mourning breaks out, fans can first really rejoice. Because the finale of Harry Potter is simply brilliant and a more than worthy conclusion of the great cinema saga.

Harry (Daniel Radcliffe), Ron (Rupert Grint) and Hermione (Emma Watson) are even after the dramatic events of Harry Potter and the Deathly Hallows - Part 1 on the search for the last Horcruxes, in which Lord Voldemort keeps parts of his soul. Harry knows that the only way he can finally defeat the Dark Lord is to destroy all the Horcruxes. But time is running out, for Voldemort has found the Elder Wand, one of the legendary Deathly Hallows, and is now ready to kill Harry for good. As the dark wizard gathers his forces at the gates of Hogwarts to strike the final blow, Harry must face his most difficult test yet - a test that will take many casualties.

Harry Potter and the Deathly Hallows - Part 2 is a literally breathtaking finale. While there were always longer quiet and also amusing moments in the first seven films, the last part is almost throughout racy, gritty, bloody and very emotional. David Yates, who has matured considerably since his Potter debut with The Order of the Phoenix, has crafted some truly magical cinematic moments that more than adequately bring this great story to a close.

In doing so, he has been particularly successful in creating great emotion without getting too cheesy or exploiting the moving moments of the finale too much. Those familiar with the book will know that the battle at Hogwarts takes some casualties and that some dearly loved characters have to lose their lives. Yates handles these scenes very sensitively, doing full justice to their emotional power, though he really only deals with them in passing. One death, however, is given a bit more time, making for one of the greatest acting moments in the entire series. The character of this character (fans will surely know who we're talking about here, but I still don't want to give it away at this point) completely transforms in just a few moments, which gives you more than a few goosebumps thanks to her excellent acting. Here it becomes clear once again that the Harry Potter were not only great entertainment cinema and fantasy fodder for the eye to offer, but that here was also great emphasis on acting skills.

Emotional highlights like this has the film in abundance to offer. Like when Minerva McGonagall and the other Hogwarts teachers try to protect the school with a magical force field, which is visually stunning, or when Neville Longbottom heroically confronts Voldemort, when Harry confesses his love to Ginny with just a glance, or when he gets a glimpse into his parents' past. But fans' emotions will also ride a rollercoaster when references to older films are sprinkled in again and again, while at the same time making it clear just how much the Harry Potter universe has changed over the years.

Alexandre Desplat's great score fits in perfectly. For he too keeps weaving familiar themes, the very ones John Williams composed for the first films, into his tapestry of sound, making the farewell bittersweet in musical terms too. There's a moment after the first attack on Hogwarts by Voldemort's minions that is almost tear-jerking, especially because of Desplat's score. While many fans would have liked John Williams to return to the series once more for the finale, it's fair to say that Alexandre Desplat certainly knows how to fill the oversized shoes of the legendary Williams and pays tribute to the composer and his work in a dignified way in the finale.

The sets, the special effects, the make up, the costumes, and the choreography of the battle razzle dazzle, in every area greatness has once again been delivered. You can sense that the creators knew exactly what they owed the fans. And also that over the course of a decade, they've delved deep into the universe created by J.K. Rowling. They've succeeded in transporting the audience to another world where, despite all the magic, you still somehow feel at home. It's nice when the farewell from such a dream world turns out to be as successful and appropriate as it is with Harry Potter.

As a farewell, Harry and his friends can also be seen in 3D for the first time. Personally, I'm not a big fan of movies that are converted to 3D after the fact. But with Harry Potter and the Deathly Hallows - Part 2, I have to say that David Yates and his team have gone about their work with great care. Sure, there are some typical 3D scenes, such as when the dragon on which Harry, Ron and Hermione escape from Gringotts bank snaps right into the audience. But on the whole, the three-dimensionality here really does have the effect of integrating the audience into the action, making you feel more like you're roaming the corridors of Hogwarts yourself than ever before. Sure, the film works perfectly well in the 2D version. But Harry Potter and the Deathly Hallows - Part 2 is one of the few cases where the 3D effect actually justifies the extra premium at the box office.

There would be so much more to say about this finale. About the great performance of Ralph Fiennes, for instance, who really looks terrifying in some close-ups. Or about Helena Bonham Carter, who is on top form, especially as Bellatrix, embodied by Hermione through Polyjuice Potion, for one of the few humorous moments of the film. About the great room of wishes or about the last scene between Harry, Ron and Hermione in the ruins of Hogwarts. But instead of going into too much detail here, it only remains for me to warmly recommend this last part to all fans of the series and to say goodbye to a beloved film series. Although there will certainly be many magical cinema moments in the future, Harry Potter was and is simply something very special. And you should definitely enjoy it now one last time in the cinema!

Cinema trailer for the movie "Harry Potter and the Deathly Hallows - Part 2 (UK/USA 2010)"
Loading the player ...