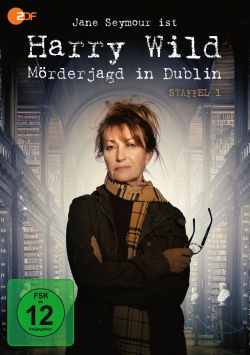 Content: When recently retired literature professor Harriet "Harry" Wild (Jane Seymour) becomes the victim of a mugger, she comes to stay with her son Charlie (Kevin Ryan), a detective with the Dublin police, and his family. When she comes across - by pure chance, of course - documents relating to Charlie's current murder investigation and realizes that the case bears astonishing similarities to an old play, she offers to help her son. He indignantly refuses - but Harry can't resist investigating on his own. Fergus (Rohan Nedd), of all people, who had attacked Harry on the street, is supposed to help her. Completely unexpectedly, the unequal duo proves to be extremely effective, which is why the first case is quickly followed by the next investigation. Much to the displeasure of the police, who don't like the idea of a detective's mother doing their job. Charlie loses more and more the nerves, but does not yet suspect that Harry will soon have a very special friend in the police...

Almost a quarter of a century ago it is now that Jane Seymour said goodbye to her parade role as "Dr. Quinn". After several films and smaller series roles, she now returns to television with a new leading role: In "Harry Wild - Mörderjagd in Dublin" Seymour plays a clever pensioner with a sharp tongue and ingenious mind, who is not easily intimidated by anyone. Harry's verbal sparring with Fergus is one of the highlights of the series, and Jane Seymour's past as a Bond girl is also made fun of with a wink. But even if there are always wonderfully funny dialogues and other comedic moments, the series also delivers in terms of drama and suspense.

The cases in which the two amateur detectives investigate, are now not necessarily a reinvention of the genre. But the conventional stories are very well written and quite cleverly constructed, so that the viewer is not only very well entertained, but also really carried away. But the whole thing is spiced up by the very good constellation of characters, which always brings new momentum to the plot. Besides Harry and Fergus, there is also the relationship between Harry and her son (and his family), as well as a love affair that should not be revealed at this point. But so much can be said: It brings with all the fun for Harry also a lot of conflict potential - on different levels.

Eight episodes comprises the first season, which was so well received by the audience that now a second season has also been ordered. This is very pleasing, because the debut of Harry Wild can be called successful in every respect. Interesting and charming characters, good scripts and a light-footed, yet exciting production make the first investigations of the former professor a real enrichment for the crime genre. For this, there is clearly a: Absolutely worth seeing!

Picture + Sound: The image of the DVD is consistently on good to very good TV level. The sharpness of the picture allows especially in brighter scenes even smaller details to come into their own. In darker scenes, these appear here and there slightly washed out, but this is only marginally negative. The colors look very natural and the contrast balance also leaves a positive impression. The sound is available in the English original only as a very centrally mixed 2.0 mix, which, however, in places seems a bit more powerful than the German Dolby Digital 5.1 mix. But since both sound tracks are primarily carried by the well understandable mixed dialogue, both the original sound, as well as the good dubbing can be technically described as successful. Good!

Extras: As an extra, there is a fairly extensive look behind the scenes of the first season (about 34 min.) on the first DVD, which consists primarily of interviews with the ensemble and the creators. There is also a short featurette about Harry and Fergus (approx. 4 min.). Small tip: Even if the extras are on the first DVD and it does not come to quite large spoilers, they should be sighted only if the last episode of the season was watched.

Conclusion: "Harry Wild - Murder Hunt in Dublin" is a very entertaining crime series that manages very well the balancing act between humor and suspense, between lightness and drama. Carried by an excellent Jane Seymour and her partner Rohan Nedd, even very conventional crime cases become fresh TV entertainment of the kind that is particularly worth watching. The three DVDs of the first season are technically well done and offer about 40 minutes of bonus material in addition to the eight episodes. Therefore, the bottom line is: Absolutely recommendable!