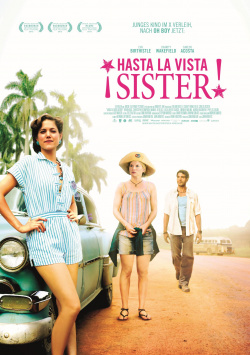 Young activist Rosa (Eva Birthistle) is astonished when, during one of her do-gooder campaigns, her always perfectly styled sister Aillie (Charity Wakefield) suddenly appears before her. Unfortunately, there is a sad occasion for this unexpected family reunion, because Roddy, the father of the two completely dissimilar sisters, has died. Ever since the former revolutionary had traded in his ideals for golf clubs and led an absolutely stuffy existence alongside his new wife Brenda, contact between him and Rosa had largely broken off. Nevertheless, she is filled with deep grief, which turns into outright shock when she learns that Brenda wants to have a golf trophy made from Roddy's ashes. Rosa will not and cannot accept this. She believes she knows what her father really wanted: to be united in death with his first wife, where they tried together to make the world a better place - in Cuba! Without further ado, Rosa steals the urn and flees to the Caribbean with her buddy Conway (Bryan Dick). But already at the airport it seems that this enterprise will end in chaos, because luxury girl Aillie joins the two. A turbulent adventure begins for the trio, during which the two sisters not only have to learn a lot about themselves, but also some surprising secrets from their father's past.

With &iexcl;Hasta La Vista Sister! British director John Roberts tries his hand at a very special feel-good comedy. Through the constant friction between the completely mismatched sisters, the clash of different cultures against the picturesque backdrop of Cuba, and a dash of romance, Roberts has attempted to build a very special flair that will entice the viewer not only to laugh, but also to dream. In his story, which is basically very amusing, he also tries to incorporate a little of Cuba's turbulent history, which also gives the whole thing a special touch. Supported by beautiful pictures and good actresses, the conditions for a real feel-good experience are just perfect.

But that wants to arise in the end only limited. The film is nice, there is no question about that. But in many places it lacks the right timing and the spice that would have turned nice into charming. There are some really nice and strong moments that show the potential the story has. Here and there a few effectively placed gags also provide some really good laughs. On the other hand, there are also some scenes that are a bit irrelevant and that slow down the already bumpy pacing of the story. Such moments don't make the movie bad. But much of its potential is taken away, which leads to a rather arbitrary overall impression.

That &iexcl;Hasta La Vista Sister! is still worth seeing in the end, director John Roberts has primarily to thank his well-cast main characters. Eva Birthistle, for example, shines as an outwardly tough idealist whose very vulnerable core comes out whenever she briefly lowers her protective shields. And Charity Wakefield is as amusing as she is charming as a luxury girl who is only superficial at first glance. The two ladies are also joined by two likable gentlemen in Carlos Acosta and Bryan Dick, who combine forces to help pull the film out of irrelevance. Had Roberts spiced up these fine acting performances and engaging camerawork with a bit more biting humor and employed a bit more coherent timing, &iexcl;Hasta La Vista Sister! would actually have been quite an enchanting feel-good comedy. As it is, the film is still beautiful and kind of likeable, but it fails to leave a truly lasting impression. For lovers of small British arthouse comedies, however, this is still enough for a: Worth seeing!