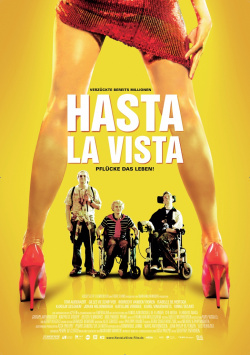 Lars (Gilles de Schryver), Philip (Robrecht Vanden Thoren) and Jozef (Tom Audenaert) are tired of still being virgins in their 20s. The young men are desperate for sex - and a holiday together, including a visit to a brothel, is supposed to finally remedy that. But easier said than done. Lars is confined to a wheelchair due to a rapidly progressing disease, Philip is paralyzed from the neck down and the shy Jozef is almost completely blind. The likelihood of them getting permission from their parents to go on holiday alone is almost impossible. Although they manage to sell the trip as a wine tour with supervision tailored to their needs, and actually get their parents' approval. But after Lars has a fit, not only does the supervisor bail out, but the three friends no longer have their parents' consent either. But they don't let the planned sex be ruined that easily. They hire the driver Claude and make a secret getaway. But not only that Claude (Isabelle de Hertogh) turns out to be a very resolute woman, also the three very different egos of the young men and their persecuting parents could put a spanner in the works...

Based on the BBC documentary For One Night Only about paraplegic Brit Asta Philpot and his fight for the right to sex for the disabled, Geoffrey Enthoven has directed the tragicomedy Hasta La Vista. It was clear to him from the start that he couldn't simply adopt the premise of the documentary, but would have to significantly alter it for a feature film without significantly changing the basic message of For One Night Only. Thus, he expanded the main characters to three friends, focusing not only on the everyday difficulties that disabled people face on a daily basis, but most especially on the friendship between the inherently very different men.

In order to achieve the highest degree of realism possible, Enthoven initially wanted to cast actual disabled people in the lead roles as well, and he hoped to find three talented young actors with the help of a casting call. But when a direct comparison with the professional actors who were also cast showed that they simply gave better performances, the director decided against his original plan after all. This didn't really hurt the film's credibility, which was confirmed to him time and again by enthusiastic viewers at festivals or test screenings.

It's pleasing to note that Enthoven doesn't exactly approach the subject of his film with kid gloves. While there are some very touching moments, in other scenes the humour is very bitter and politically incorrect without the jokes being at the expense of disabled people. It's a difficult balancing act that the film manages brilliantly. Also, the fact that the characters aren't always portrayed in a positive light (Philip in particular can be a real pain in the ass) takes away any forced consternation that would have been fatal for a film with such subject matter.

Hasta La Vista isn't a perfect film, there are a few too extreme lengths for that and a few moments where the mix of comedy and drama just doesn't quite want to work. Overall, however, the story spreads a tremendous joie de vivre and there are always scenes that are not only extremely funny, but simply make you happy. A film that entertains and makes you think in equal measure, that amuses and moves and that simply leaves the viewer with a positive feeling. So very special feel-good cinema that viewers who appreciate comedies of a more sophisticated kind should definitely not miss. Worth seeing!