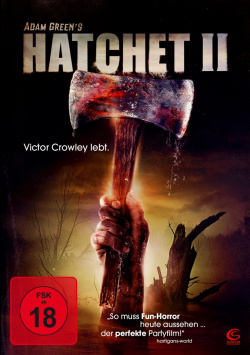 Film: Victor Crowley is back! And, of course, he immediately jumps on Marybeth (played in part 2 by Danielle Harris), the only survivor of the bloody events of part 1. But Marybeth can flee and swears revenge. She's finally trying to kill off the deformed killer. With the help of Reverend Zombie (Tony Todd) and her uncle (Tom Holland), Marybeth gathers a group of intrepid hunters around her to track down and kill Crowley. But hardly arrived in Victors precinct becomes clear, who hunter and who booty is here...

With "Hatchet" Adam Green 2006 had staged an amusing homage to the Backwood-Slasher of the 80s and could inspire genre fans all over the world. Now comes the highly anticipated sequel to our home theaters, which promises even more quirky wit, even more blood and even more Gore. But "Hatchet II" can only keep this promise to a limited extent. There are numerous amusing moments and the game with the clichés of this subject has succeeded again in the second attempt. Nevertheless, the whole thing seems as if Green had tried too hard to be even more funny, even more clever than in the first part. This makes the humor in many places too over-twisted and silly to be able to pass as a loving homage.

However, the film could still score with its completely exaggerated splatter interludes. Could be, if not for the publication in Germany the scissors would have been set strongly. There is hardly anything left of the coarse effects that made up the fun factor of the sequel. This is astonishing because the effects are so exaggeratedly comic and not horrifying and because they are clearly recognizable as effects. The fact that some viewers might confuse reality and fiction, which might be the case with some horror movies, wouldn't have been to be expected with "Hatchet II". Nevertheless, almost 3 minutes fell victim to the scissors in Germany. And even if viewers who don't know the unabridged version that was shown at the Fantasy Filmfest 2010 don't notice every cut, some scenes seem to have been edited with Victor Crowley's chainsaw.

What's left is a splatter fun that's always stalled when it's running high. Genre fans will enjoy the performances of Kane "Jason" Hodder, Tony "Candyman" Todd or "Chucky" director Tom Holland and the small guest appearances of actors from the first part. Especially the way Parry Shen, whose character Shawn actually blessed with time in the first movie, was brought on board again is quite amusing. Genre-Professional Danielle Harris ("Halloween 4 + 5", "Dark Legends"), who has taken over for Tamara Feldman, does her job quite well, even though she raises an eyebrow a bit too often at the beginning.

In itself "Hatchet II" is a very successful sequel, which only suffers from the fact that it tries a bit too tense to put all the successful elements of the predecessor in the shade. If the cuts in the German home theater version weren't very obvious, this DVD could be warmly recommended to all fans of part 1, because the movie is entertaining. But such a recommendation is only possible to a very limited extent.

image + sound: Technically, the DVD is on a good level. The picture is pleasantly sharp in the bright sequences and especially the red tones are very effective. The black levels are good, but in the dark sequences there are some weaknesses in contrast and sharpness of detail. The sound remains largely calm, but in some moments of tension effective surround effects are used. Good!

Extras: The shortening of the main movie also affects the bonus material. For the German publication, for example, a short documentation dealing primarily with the Gore effects was completely deleted. But also with the other extras the scissors were applied strongly. In the Making of, it takes 7 minutes to deal with the very moments that have been cut out of the main film. Apart from that this documentary is well worth seeing and informative - even if here, as in the film itself, the most interesting moments are missing. The shorter "First Look" advertising documentation has also been shortened, but only by 7 seconds, which can be a bit of a pain.

On the other hand, the two unfortunately not optionally subtitled audio comments were not shortened, which has the consequence, however, that they no longer run synchronously to the actual film after a few minutes due to the cuts in the main film and in the end run beyond the credits - which increases the running time of the film from almost 78 to 82 minutes. The first comment was spoken by Adam Green, cameraman Will Barratt and special makeup effects supervisor Robert Pendergraft, the second by Green and performers Kane Hodder and Tony Todd. While the first commentary is more about the technical aspects and contains a lot of interesting making of information, the second commentary is more about the events during the shooting and the reactions of the fans. Of course, what's a bit annoying is that there is some talk about things that the viewer doesn't get to see, and there is also some discussion about scenes that are long gone due to the cuts. And once the participants take a break and the original sound of the film is playing, it is of course not synchronized with what the German viewer sees. Nevertheless, it is nice that at least the comments have not been cut.

Fazit: Not quite as carefree as its predecessor, but nevertheless entertaining and bloody, "Hatchet II" presents itself in Germany unfortunately in a strongly cut version. So what makes this sequel worth seeing is hardly recognizable here. And also the bonus material only appears in abbreviated form in this country, which makes it extremely difficult to recommend this home cinema premiere to genre fans.