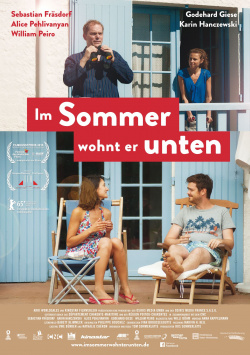 In summer he lives downstairs

Money rules the world! At least that's how David (Godehard Giese), an ambitious banker's son, sees it. He and his wife Lena (Karin Hanczewski) want to take a vacation at his family's holiday home on the French Atlantic coast. Matthias (Sebastian Fräsdorf) is also spending the summer here with his girlfriend Camille (Alice Pehlivanyan) and their son Etienne (William Peiro). Unlike his brother, Matthias has opted for a much more laid-back lifestyle. Instead of working, he prefers to enjoy life, love, and doing nothing. When David and Lena arrive a week earlier than planned, the two completely different worldviews collide after only a few minutes. Matthias is forced to move from the spacious upstairs room to the small downstairs chamber, and Etienne is sent to live with his father so he doesn't disturb the new arrivals. While Matthias lets the bossy behavior get the better of him, Camille's signs are set for confrontation. But the conflict will unfold quite differently than it first appears.

With his feature film debut In Summer He Lives Downstairs, director Tom Sommerlatte seems to want to pay tribute to French cinema. Not only the location on the French Atlantic coast, which immediately makes you want to go on holiday, provides for this impression. The very subtle humour, the dialogue duels and the light pinch of fine eroticism also spread a lot of French flair. The dramaturgy, on the other hand, is so universal that even it does not necessarily suggest that the film is a German production. With a fine gift for observation, the filmmaker manages to extract an unaffected situational comedy from very everyday conflict situations, which repeatedly pushes the entertainment value of the film upwards.

This is contrasted by a very worn narrative flow. Some scenes drag on a bit, robbing the story of the verve that is achieved in other scenes through the dialogue and acting of the cast. Even though Sommerlatte does a great job of developing his characters and their story in a limited amount of space, he seems to get lost in his attention to detail from time to time, unnecessarily slowing down his narrative flow. As a result, the production becomes a wee bit unwieldy, making access to the story probably only possible for program cinema-savvy viewers.

Besides that, In Summer He Lives Downstairs is an enjoyably light-footed, interesting chamber drama set against a gorgeous backdrop, and it's a testament to the director's promising talent in enough places to comfort over isolated weaknesses. A real recommendation for all lovers of German and French art house cinema and for all those who want to escape the autumn grey for 90 minutes. Worth seeing

Cinema trailer for the movie "In summer he lives downstairs (Deutschland/Frankreich 2014)"
Loading the player ...