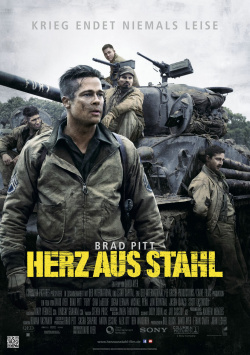 Europe, 1945: World War II enters its decisive phase. Allied troops are advancing for a final major push against Hitler's forces. In this bloody confusion, war-scarred Army Sergeant Don Wardaddy Collier (Brad Pitt) and his men are sent on a dangerous mission behind enemy lines in their Sherman tank. But the mood within the crew, who have just returned from a bloody mission, is extremely tense. The fact that they are now to be joined by young recruit Norman (Logan Lerman), who takes the place of their fallen chamberlain, doesn't help to boost morale. When Norman's inexperience leads the mission into a deadly ambush, things threaten to escalate for good.

With Heart of Steel, director David Ayer returns to the gritty realism-infused style that made his earlier works like End of Watch and Street Kings so worth watching, following the commercial failure of action smash Sabotage. In the case of this war film, that has some very strong advantages, but also some disturbing disadvantages. The biggest advantage is undoubtedly that the unadorned staging creates an oppressive sense of claustrophobia during the scenes that take place inside the tank, drawing the viewer into the action with extreme intensity. This makes for high tension and some very intense moments, especially in the final act, through which Heart of Steel reveals a clear potential for becoming a classic modern war film.

However, it doesn't come to that in the end. For Ayer's style brings with it a major problem, particularly in the drawing of his characters. To be sure, he deserves credit for not presenting any overstylized heroes here, but rather broken types who have been jaded by war. A certain authenticity can't be denied to these characters. However, Ayer doesn't succeed in giving his anti-heroes some positive sides as well. Especially in contrast to the clueless Norman, who quickly becomes an identification figure for the audience, the other crew members of the tank come across as extremely unsympathetic. This impression is intensified in a scene where Norman befriends a young German woman. The behavior of Gordo (Michael Pe&ntilde;a), Bible (Shia LaBeouf) and just Coon-Ass (Jon Bernthal) is just repulsive in this scene, so that as a viewer you lose every last spark of sympathy for the men at this point at the latest. With it, however, also the interest in their fate dwindles, whereby the story with 134 minutes anyway told too extended threatens to drift into irrelevance.

The actors are not to be blamed thereby. Even if especially Shia LaBeouf's rage-filled facial expressions sometimes seem too forced, all actors deliver good to very good performances. Especially Logan Lerman and Brad Pitt are beyond any doubt. But what good are the best acting performances if the audience doesn't care about the characters at some point? The fact that the film in the end only celebrates the usual hurrah-patriotism under its brutal-realistic guise doesn't necessarily lift the overall impression of the flick. No question, Heart of Steel has some very strong moments that hit the audience's stomachs with full force. At such moments, comparisons to Das Boot or Saving Private James Ryan are entirely appropriate. But the extremely unlikable characters and the story that repeatedly wanders on the edge of irrelevance ensure that in the end it is only enough for a with cutbacks just worth seeing.