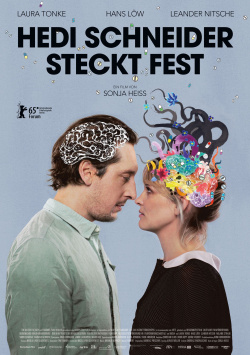 When Hedi (Laura Tonke) gets stuck in the elevator on her way to the office one morning, she takes the situation with humor. Because that's Hedi: even in moments when others would panic, she remains calm. But then, one evening, she of all people is struck by an anxiety attack that throws her hitherto perfect family life completely off course. Instead of seeing only the positive sides of life and looking forward to the future, Hedi's everyday life is now dominated by existential fears that paralyze her. She can no more think of working than she can think of moving to Africa with her husband Uli (Hans Löw) and their son Finn (Leander Nitsche). Uli quickly loses his job there, and he is as helpless in the face of the situation as his wife. It doesn't take long for the anxiety disorder to become a real test for their marriage and their love, which is actually so unshakeable. Hedi does not want to lose this happiness - but what to do when she is stuck in her fears after all?

With Hedi Schneider steckt fest Sonja Heiss was able to win the Hessian Film Award 2014 for Best Film, beating off enormously strong competition such as the excellent drama Im Labyrinth des Schweigens. The reason for this was the good acting of lead actress Laura Tonke in combination with the fact that Heiss tackled a difficult subject with refreshing lightness. But the fact that the film is mostly labeled as a comedy in the process isn't really understandable. Sure, especially in the first few minutes there are some very funny scenes and also in the further course of the story the action is occasionally lightened up by endearingly unconventional humor. But on the whole the film is a drama, in which the topic of anxiety disorder is treated with the appropriate dramaturgical gravity.

What is highly creditable to the production is the fact that the story is not only told from the point of view of the affected Hedi. Rather, it also attempts to show what her illness means to Uli, what he is willing to give up, and what forces he must mobilize to stand by his wife during this difficult time. How much he has to suffer from the powerlessness of helplessness is as much a part of the story as Hedi's despair at being stuck in an indefinable fear. This is definitely terrifically acted and, especially in the first half, very well directed auteur cinema. But towards the end the whole thing gets a bit more unwieldy and then also uses some unnecessary clichés (especially concerning Uli), which is a bit of a pity considering the many good aspects.

Hedi Schneider steckt fest has some very nice moments, but not always the mixture of comedy and drama, of lightness and heavy content really wants to work. The whole thing is intense, but entertaining only to a certain extent. Who appreciates strongly acted program cinema from Germany and generally puts an interesting content above a relaxed entertainment value, should definitely not miss this film. But if you expect a light comedy based on the trailers or a real masterpiece based on the awards, you might leave the cinema disappointed in the end. For that we give it a: With cutbacks worth seeing!

Cinema trailer for the movie "Hedi Schneider gets stuck (Deutschland/Norwegen 2015)"
Loading the player ...