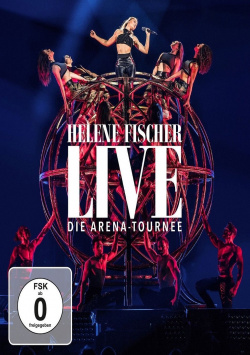 Content: When I first saw Helene Fischer on stage, I was still quite at the beginning of my journalistic career. One of the first plays I was allowed to discuss was "Anatevka" at the Volkstheater Frankfurt. And here, in addition to main actor Tony Marschall, Helene Fischer also played a supporting role on stage in 2005. It would be a lie if I claimed that I had noticed her particularly at that time and that I had already guessed that she would celebrate her breakthrough only a short time later. But at least she left such an impression that I immediately recognized her when she first saw her on television. And even though I didn't really like their music, which was much more popular than their newer songs, I followed their rapid rise with great interest.

Because it has always impressed me how professionally Helene Fischer works. And 13 years after their performance in the Volkstheater, I was able to get a picture of them in January 2018, even in the completely sold out Festhalle. What do you want me to say? The show was breathtaking and the atmosphere was great. From my second place it didn't look like that before the concert started. Some of the seats sold next to me were on the side of the stage where the view was miserable to say the least. It was absolutely understandable that some visitors gave free rein to their displeasure in view of the not exactly low ticket prices. But then something happened that I had never experienced before at a concert: Immediately with the beginning of the show the mood changed abruptly. Those who couldn't see well simply grabbed their companions and danced in the corridor, they sang, laughed and moved a bit closer together.

The show, which was garnished with spectacular acrobatics, showed once again what a professional Helene Fischer is. But in addition to her perfectionism, there was also a pleasant relaxedness with which she responded to loud interjections from fans in love or emphasized her very special relationship to Frankfurt. The audience, which consisted of young couples as well as older fans, was enthusiastic about Helene Fischer's appearance from the first second on. And that created an atmosphere that is of course difficult to capture in a recording.

What this recording has succeeded in doing, however, is to capture the actual show and the effort invested by all participants for the smooth running of the show in really great pictures. Of course: Those who have witnessed the show live will realize that some things that worked spontaneously, like so many things, are only perfectly rehearsed. This robs a little of the illusion with which Helene Fischer manages so perfectly to present herself as an approachable superstar. But that doesn't change the effect she has on her fans - no matter if live or "only" on DVD and Blu-ray.

In contrast to the TV broadcast, this home cinema version shows the concert in full length. That's three hours of the best live entertainment with great shows. For fans who were lucky enough to have been there live during the tour, the perfect memory of a great concert evening. And for all those who couldn't get a ticket, it was the best possible opportunity to experience this live experience. And that's why this concert recording is clearly worth seeing!

Picture + Sound: The Blu-ray image has a very high image sharpness, powerful colors and a decent image depth, which makes the live feeling can easily spread in the living room at home. The sound mix, which is available in PCM stereo and as DTS-HD Master Audio 5.1 mix, also helps here. Everyone can choose the right sound for their home cinema system. If you don't have surround speakers, you'll also get your money's worth with the very powerful stereo mix. If you own a more sophisticated system, you should switch on the DTS-HD MA track. Very good.

Extras: While the single edition has to do without extras, the edition offers 2 CDs, DVD and Blu-ray as well as a bonus DVD with the bonus material. The 85-minute tour documentary "Helene Fischer - Immer weiter" will be shown. The extensive preparation of the tour is shown in detail - from the first rehearsals to the stage construction to the costumes. A very successful documentary, which was to be seen on TV only in a clearly shortened version.

Fazit: "Helene Fischer Live - The Arena Tour" is a must for all fans of the successful artist. The spectacular show is captured in great pictures. And even though the whole thing was a bit more intense live, the recording also offers three hours of great entertainment, which impressively prove why Helene Fischer is currently the most successful artist in Germany. absolutely recommended!