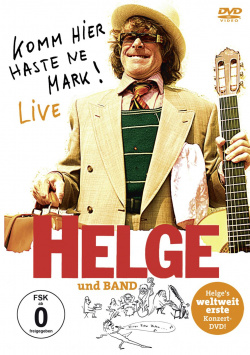 Content: Finally it's here, the world's first live DVD by Helge Schneider! On "Komm hier haste ne Mark!", recorded in Berlin's Admiralspalast, the camera captured what makes a Helge performance so special. There's no typical stand-up comedy here. Rather, the multi-talent from Mülheim an der Ruhr presents a curious mixture of improvisation comedy, jazz concert, parodies and relaxed tea time. Helge tells of people who are so well known that nobody knows her name, reveals the star airs of Christina Aguilera, who is surprisingly upset when you just put her under your rock or proves that he is at least as international as Sarah Connor when singing blues in English.

Must not miss the parodies, which he sometimes more, sometimes less recognizably gives to the best. For example, Joe Cocker and Nena drop by at "Fitze Fatze" (Gus Bacus could have been Helge, but nobody knows him anymore), and at the grand finale Herbert Grönemeyer, Udo Lindenberg and of course Peter Maffay are still in attendance. And if the successful actor, director, writer and singer Helge doesn't prove his musical skills on one of the numerous instruments, he can be served a cup of tea on stage by the stage butler Bodo.

In just 90 minutes on the small, rather simply lit stage well organized chaos, bizarre comedy of the finest and a musical ramble through the different styles, from French chanson to American blues, Spanish flamenco, German Schlager to jazz of course. His improvised character also seems to be reflected in the live performances of the "singing Herrenorte" and make Helge Schneider's shows unique in their very special way. And that's exactly why this DVD can be recommended to every fan, even if you've already seen several of Schneider's performances yourself.

Picture + sound: As the final product was not available for testing, no rating can be given for the technical implementation of the disc. All in all it can be assumed for the DVD available in stores that the picture is rather dark according to the stage design and that the sound captured the live atmosphere well.

Extras: A total of four bonus numbers with a running time of almost 25 minutes are included as an add-on on the DVD. Highlight of the extras is a very amusing version of the Helge classic "There is rice, baby", a visit of the "revenge chicken" or a trip with Helge to the disco. For fans a nice encore!

Fazit: Fans had to wait a long time, but with "Come here haste ne Mark!" Helge Schneider's first live DVD is finally available in the shops. And this recording offers fans exactly what they could expect from their Helge: weird comedy, jazzy music and well thought-out chaos make this DVD a treat for all fans!