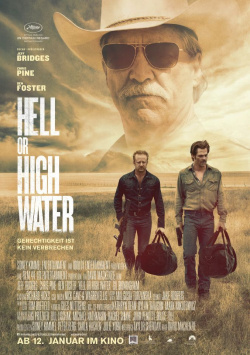 After the death of their mother, the ranch of brothers Toby (Chris Pine) and Tanner Howard (Ben Foster) is facing foreclosure. This would mean that the family would lose everything that their parents, and later the brothers, have worked so hard for. And if the bank takes the land, Toby has nothing with which he can secure the future of his two sons. And so there is only one way out for them: They rob all the branches of their bank in the county, so that they can then settle their debts with their own money. In itself, an ingenious plan that only Texas Ranger Marcus Hamilton (Jeff Bridges) and his partner Alberto Parker (Gil Birmingham) could thwart. The two cops lay in wait, just waiting for the bank robbers to make a mistake - and with the hot-headed Tanner, that's really only a matter of time.

With Hell or High Water, Scottish filmmaker David Mackenzie presents a great neo-Western that has plenty of dry humor and enigmatic moments to go along with a very exciting story. The great screenplay is penned by Taylor Sheridan, who was already responsible for the book to the excellent thriller Sicario. Sheridan not only puts great dialogue in the mouths of the characters with a lot of dry humor. He also creates very lifelike supporting characters that clearly make this film stand out from the crowd. The old lady, for instance, who serves Hamilton and his partner in a restaurant is wickedly funny in such a low-key way that it's just a sheer delight. This turns a very simple scene of ordering a steak into a real highlight.

The film is full of moments like this, adding even more facet and entertainment value to what is already a good story in itself. Add to that great camerawork that shows an inherently barren land full of failed livelihoods and economic misery in mesmerizing beauty. And then, of course, there are the top-notch actors. While Jeff Bridges is terrific as always and Ben Foster proves once again that he can embody broken characters like Tanner with enormous conviction, Chris Pine in particular manages to show a different, rougher facet of his skills. And he does it really, really well!

Hell or High Water is much more than an entertaining gangster drama. It's a story about two mismatched brothers fighting for their family. It is an almost satirical reckoning with the corrupt financial system and with politics, which just leaves the simple rural workers completely alone with their problems. But also the love of weapons of the Americans is thematized here with a proper wink. A great film that is worth seeing on the big screen for its imagery alone. Absolutely worth seeing!!!