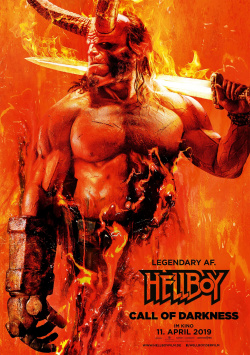 This could be big trouble: The legendary witch Nimue (Milla Jovovich) is about to make her return. She had once been defeated and dismembered by King Arthur. The individual body parts of the witch had been buried in secret locations throughout England so that she could never again threaten humanity. But foolishly, most of the boxes in which Nimue's body had been distributed had been stolen. To protect the last boxes, half-demon Hellboy (David Harbour) is called in to help. Actually a good idea - but with a catch. Because she wants to get him to follow his real purpose and bring about the end of the world. But of course Big Red is not so easily drawn to the dark side. Together with his two new comrades Alice (Sasha Lane) and Ben (Daniel Dae Kim) he wants to put a stop to the witch once and for all. But might it already be too late for that?

It's not often that movies make me really angry. Hellboy - Call of Darkness is one of those rare instances. Ahead of time perhaps, I'm a big fan of Guillermo del Toro's Hellboy films and was naturally disappointed that he wasn't able to complete his planned trilogy and that instead they went for a reboot of the franchise. Still, I remained open-minded towards it, especially since it was supposed to be even more closely based on the comics and accordingly a bit darker, dirtier and bloodier than the first film adaptations. And in this respect, director Neil Marshall has also delivered. But the rest is just plain annoying.

Not only that the CGI effects look cheap almost throughout (for example, when Alice becomes a mouthpiece for the deceased, it's visually just ridiculously implemented), but also the numerous practical effects can only convince to a limited extent. Everything somehow seems too much like a trashy B-movie. This may fit the character of Hellboy in places. But the wildly from different comic stories cobbled together script, the bad dialogues and a staging that seems to rely only on violent brutality, as overwrought as it may be, pushes the entertainment value down significantly again and again.

You can tell that the film is desperately trying to be fun. But it just doesn't succeed. The dialogue isn't funny - with a few exceptions. The characters aren't cool, they're just trashy, and the acting can't do much to pull that out, despite such reliable performers as Ian McShane. Yes, Hellboy - Call of Darkness wants to be a trashy pleasure - but unfortunately the movie is only trashy and so no pleasure at all. And especially for fans who have been looking forward to a new big screen appearance of Big Red for a long time, a few good scenes are not enough to make them feel well entertained in the end. That's why, unfortunately, all I can say about this movie is: to hell with you, Hellboy! Because this piece of crap is unfortunately only bearable for hardcore trash fans!

Cinema trailer for the movie "Hellboy - Call of Darkness (USA 2019)"
Loading the player ...