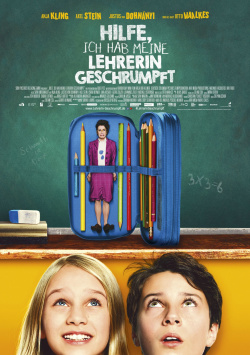 New school, new trouble: 11-year-old Felix (Oskar Keymer) has hardly been at his new school a day when he already clashes with the school principal Dr. Schmitt-Grössenwein (Anja Kling), who is hated by everyone. In order to at least be accepted by his classmates, Felix is persuaded by the arrogant Mario (Georg Sulzer) and his clique to take a dare: he is supposed to break into the old staff room, which is supposed to be haunted. But of course the boy is caught by the headmistress, who immediately threatens him with expulsion from the venerable school. But then Felix accidentally triggers a curse from the old school founder (Otto Waalkes), which causes Dr. Schmitt-Grössenwein to shrink to the size of just 15 centimeters. And now he not only has his shrunken teacher, but also a big problem on his hands. Should he fail to reverse the curse, there would be no one left to stop school board member Henning (Justus von Dohn&agrave;nyi) from closing the school. And Felix and his new friend Ella (Lina Hüesker) must prevent that at all costs.

Following the successful 7 Dwarfs films, director Sven Unterwaldt stays true to the comedy genre with his new film. Based on the children's book of the same name by Sabine Ludwig, Unterwaldt has staged a turbulent, brightly coloured adventure, which takes a very simple approach to humour. Poor Anja Kling, as a shrunken teacher, gets everything that can be found in a chaotic male household smeared on her face. This variation of the classic pie-in-the-face gag may be quite funny for children, but is absolutely overused here, so that in the end it simply no longer seems funny, but only boring.

Also the very one-dimensional character drawing, the sometimes overly silly play of the adult actors and the rather restrained moments of suspense make it clear that the film is aimed primarily at young viewers between 6 and 9 years. They will have a lot of fun when Felix and Ella experience all kinds of turbulent adventures with their miniature teacher, culminating in a successful finale in the secret basement rooms of the school. They won't mind all the clichés and embarrassments that adults can only shake their heads at in annoyance.

Help, I Shrunk My Teacher may only be a rather below-average children's film in purely qualitative terms. But with its fast pace, very direct gags, and fantastical elements, the film serves its target audience very well. You don't have to like or understand that as an adult. So if you want to give your kids a harmless adventure with a lot of humor and some nice moments, you should buy a movie ticket for this film for them. However, if you attach importance to a certain pedagogical claim or have something against children's comedies with pee-pee and fart humor in principle, you should give a wide berth to any cinema that shows this work. Therefore: For its target group definitely worth seeing!