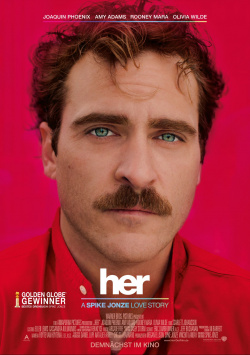 Los Angeles in the near future: Theodore (Joaquin Phoenix) earns his money by writing personal letters for people. Whether it's for birthdays, weddings, or just the really big love, Theodore always hits just the right note for his clients. But while he brings happiness into other people's lives through his work, he just doesn't want to do the same with his own. After being heartbroken by the end of a long-term relationship, he is in danger of being completely crushed by his melancholy. But then he gets himself a new voice-controlled operating system, which is supposed to have a completely new, intuitive and constantly evolving personality. And when he hears Samantha's voice for the first time, he is smitten. The sensitivity and understanding shown to him by the system, and Samantha's disarming humor, restore Theodore's courage and cheerfulness, and he begins to fall in love. But is love between a human and a computer system even possible?

Spike Jonze, a master at telling unusual stories, consistently continues his signature style in Her. It is his first directorial effort, for which he also single-handedly contributed the screenplay, for which he went on to win an Oscar. This award is probably less due to the dialogues, which are sometimes very amusing or simply of a certain poetic beauty, but are not among the best that was written last year. Rather, it's the wonderful story, which deals with very human themes on several levels at once, including the most important of all: love!

Almost subtly, Jonze creates a picture of a futuristic Los Angeles. With locations in L.A., Shanghai and Lake Tahoe and very discreet effects a very special atmosphere is built up visually, which on the one hand is very beautiful, but at the same time somehow oppressive. For in this world a loneliness reigns, the beginnings of which can already be observed in our present. The fact that people are more occupied with their smartphones, laptops or tablets than with their environment is unfortunately not an exception in our everyday lives, but rather the rule. In Her, this phenomenon is consistently continued by computer systems not only regulating every area of life, but also being given human, independent personalities. Due to his broken heart, Theodore is one of those people who live in complete isolation and whose everyday life is dominated by an omnipresent sadness. On the one hand, this is intensified by the complete digitalization of society. On the other hand, it is precisely a computer system that restores meaning and new cheerfulness to his life.

And this is where another, more philosophical level of the story comes in. It involves the oft-asked question of what makes a person human, and whether machines can ever be capable of feelings of their own, like love. And anyway, what is love anyway? Can the feelings Theodore develops for a voice that is merely synthetic be considered real love? These are questions that make one fear very heady, unwieldy fare. But even though Her deals with quite profound issues in a way that doesn't necessarily appeal to the masses, Jonze has first and foremost created a quite enchanting entertainment film. With quiet poetry, a lot of melancholy and disarming humor Jonze tells the most unusual love story of recent years. And not to be enchanted by it is almost impossible.

The very good, endearingly quirky performance of Joaquin Phoenix and the equally successful performances of Amy Adams or Olivia Wilde make Her also acting a treat. But if you want to enjoy it to the fullest, you have to watch the original English version, in which Samantha is perfectly brought to life by the sexy voice of Scarlett Johansson. But even in the German dubbed version, the film is a quite wonderful arthouse gem for which there is only one possible rating: Absolutely worth seeing!