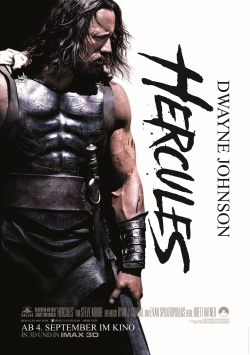 Hercules (Dwayne Johnson), son of Zeus, after having to pass twelve trials to appease the wrath of the gods, has turned weary and jaded from the divine part of his heritage. With six like-minded men, he lives as a mercenary only for paid combat. Hercules is not concerned with good or evil, but only with how much he gets paid. When he is tasked by King Cotys (John Hurt), the rightful owner of the throne, to train his troops to fight the tyrant Rhesus (Tobias Santelmann) and lead them into battle for Thrace, the son of the gods does not question the assignment. The latter doesn't realize that Cotys is playing a double game that could lead Hercules straight to his doom until it's almost too late.

Already a few months ago, a version of the legend surrounding demigod Hercules hit theaters. However, Renny Harlin's action film starring Kellan Lutz in the title role was a complete failure both artistically and commercially, which didn't help the anticipation for another Hercules movie. Nevertheless, Dwayne Johnson now gets to step into the role that Arnold Schwarzenegger, Lou Hulk Ferrigno, and Kevin Sorbo have already tried their hand at, under the direction of Brett Ratner (Rush Hour). And even if Ratner's Hercules is far from being high-quality entertainment cinema, a certain fun factor can't be denied.

This is not only due to a wonderfully exaggerated production, which often doesn't seem to take itself too seriously, but above all to the play of Dwayne Johnson, spiced with a little self-mockery. The former wrestler is just a damn good action hero, who even with a silly lion skin on his head still looks extremely cool. When Johnson spices up his fights with amusing one-liners, it's just a lot of fun - even if the script itself is rather poor. Besides The Rock, Ian McShane as the soothsayer Amphiaraus leaves a special impression, who together with Hercules provides some of the best and most amusing moments of the film.

The other actors remain a bit pale, which is again due to the weak script, which simply does not succeed in making the characters really interesting and filling them with life. For example, swimsuit model Irina Shayk is not allowed to be anything more than fodder for the male viewer's eye in her big screen debut, and even a veteran like John Hurt can barely compete with the shallow script. Only the fighter Atalanta, played by Ingrid Bols&oslash; Berdal, of Cold Prey fame, is still a halfway interesting character. But again, too much potential is simply wasted.

Ratner's take on the Hercules mythos, based on Steve Moore's comic book, is a purely fun film that falls short of its potential and as a result is nowhere near as epic as Ratner probably originally envisioned. But as a simply knitted historical adventure with light fantasy elements the whole thing works very well due to the cool lead actor and some decent show values - provided you lower your intellectual standards to a minimum. So if you don't expect more than a damn expensive B-movie with some really good action scenes, you'll definitely have fun here. And for such viewers then also applies: well worth seeing!