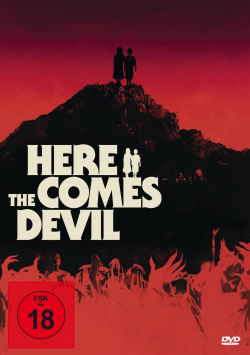 Content: It was supposed to be just a relaxing family trip to a cave system near Tijuana. But for Felix (Francisco Barreiro) and his wife Sol (Laura Caro), the trip turns into a real horror when their two children Sara (Michele Garcia) and Adolfo (Alan Martinez) disappear without a trace while their parents indulge their lust in the car. A night of fear is followed by relief the next day when the children reappear seemingly completely unharmed. But Sol in particular notices that their behavior has changed. The suspicion arises that something terrible has happened to the children in the caves that has downright traumatized them. When Felix and Sol learn something that corroborates this suspicion, they make a decision that will change their lives forever. But were their suspicions really well-founded, or might the truth be quite different?

From its opening sequence, Here Comes the Devil makes it clear that you're not dealing with a conventional scary movie. Director Adrián García Bogliano quickly builds up an atmosphere charged with eroticism and subliminally menacing, which is hard to escape. It is true that at first glance one wonders, and not only with this opening scene, what it has to do with the actual story. But even if the production is a bit unwieldy at such moments, this doesn't have a negative effect on the overall impression. This is due to some very effective shock moments and the oppressive finale absolutely positive.

All the same, you have to get used to the overall quite quiet narrative and the somewhat cryptic plot construct. Here, the viewer is not chewed in detail and everything is explained in such a way that it really understands everyone. Rather, the director plays with symbolism, limits himself to allusions and deliberately leaves some questions unanswered. This can be a bit frustrating in the end, if you're used to straightforward, clear storytelling patterns. But those who like to squint in the direction of arthouse fare even in the horror genre and are not afraid to leave the intellect switched on here and there, will be able to recognize what really lies behind the disturbing-obstructive facade of the film.

Now this is not to say that Here Comes the Devil is completely cerebral art cinema. Some of the images speak too clearly for that. But even if he uses some conventional means, Adrián García Bogliano leaves the usual genre paths often enough to make his film something very special. This may not really be suitable for the masses, but who likes it not only scary, but also unusual, should not miss this successful contribution of the young Mexican horror film in any case. Worth seeing!

Picture + Sound: Since for the test nu purely data-reduced press sample was available, no rating can be given here to the picture and sound quality.

Extras: Also the bonus material could not be sighted on the press DVD. Announced are an extensive making of, as well as the trailer for the film.

Conclusion:Here Comes the Devil is a bloody mystery thriller beyond the mainstream. Despite some slightly unwieldy, chewy moments, the oppressive atmosphere and the many small but totally effective shock effects make this film a tense and gripping genre entry that should not be missed by lovers of more sophisticated scary fare. Recommended