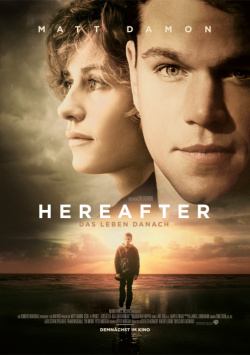 Clint Eastwood once again proves his versatility with his 32nd directorial effort "Hereafter - The Afterlife". With Steven Spielberg as producer and a script by Peter Morgan ("The Queen", "Frost/Nixon") as a basis, Eastwood has directed a moving film about death. In doing so, he moves very close to the border of kitschy spirituality, but manages to masterfully skirt it at all times.

The film tells the stories of three people, all of whom have had different experiences with death. In Indonesia, French journalist Marie (Cécile de France) falls victim to a devastating tsunami and is saved at the very last second. But the near-death experience has changed the otherwise rational journalist and made her face more than just her own mortality. In London, little Marcus (Frankie and George McLaren) loses his twin brother in a tragic accident and desperately searches for a way to cope with the loss. And in San Francisco, psychic George (Matt Damon) tries to live a normal life despite his gift that allows him to communicate with the beyond. As different as these three people's experiences are, what they all have in common is a search for the right path, a search that will intertwine their lives in fundamental ways...

After the accidental death of a close friend, writer Peter Morgan began to explore death, mortality, and near-death experiences, which eventually resulted in the screenplay for "Hereafter - The Afterlife". The great feat of the screenplay and Eastwood's sensitive production is that no firm standpoint is actually taken here, no definitive rejecting, skeptical or overly esoteric approving stance is taken, or religious aspects are too obtrusively woven into the story. It is almost entirely dispensed with. Rather, a quiet, empathetic portrait of three people at a significant turning point is told, a turning point that in all three cases involves death in some way and is meant to lead them back to life.

The afterlife is presented as a possibility, but always in such a way that it could still be rationally explained in some way by skeptics. Yet the very possibility of it somehow continuing after death is presented as redemption for the living, as a way to learn to cope with their loss or experience of death. Of course, the character of George in particular, played very well by Matt Damon, is one that the viewer can only find believable if there is some openness to spirituality. But since the focus of the film is not his abilities themselves, but the impossibility of leading a normal life with them, even skeptics are likely to sympathize with George.

It is almost unbelievable how magnificently Eastwood avoids kitschy elements here. Only the music, composed by himself, wears a little too thick at times. With an obviously quite decent budget, which is revealed especially in the very moving tsunami sequence at the beginning of the film, and with wonderful actors, among whom the twin pair Frankie and George McLaren, who both alternately play both Marcus and Jason, inspire, Clint Eastwood has hit the mark again. He's created a very quiet, moving film without a lot of kitsch or pathos, which deals with death but celebrates life. Absolutely recommended!

Cinema trailer for the movie "Hereafter - The Afterlife (USA 2010)"
Loading the player ...