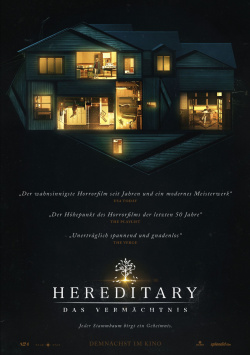 Annie (Toni Collette) leads a seemingly harmonious small town life with her husband Steve (Gabriel Byrne) and their children Peter (Alex Wolff) and Charlie (Milly Shapiro). But after the death of Annie's mother Ellen, some unexpected chasms reveal themselves as mysterious occurrences pile up. At first, these can be easily dismissed as figments of the imagination. But after a gruesome accident, it seems clear that the family's terrible fate has long been predetermined.

With his feature debut Hereditary - Das Vermächtnis, director Ari Aster has created an atmospheric horror film that doesn't live so much from its shock moments - although there are certainly those - but rather from its disturbing slowness, which is only a little overused here and there. True, the story isn't exactly characterized by what can commonly be called normality from the get-go. But the way the madness gradually spreads and is also transferred to the viewer is really well executed.

Sure, on close inspection there are significant logic holes. And some scenes drag on quite a bit. But Aster is able to make up for that with purposefully used, haunting shock moments (one scene I'm sure no one will ever forget again) and unexpected plot twists. However, you have to be able to engage not only with the sustained narrative pace, but also with the somewhat whimsical underlying tone of Aster's production, otherwise the film could quickly wear on your nerves.

Hereditary - The Legacy is not a horror film for the masses. It's just too unwieldily realized for that. But it's definitely a film that can leave a strong impression. Aster does a great job of making his audience feel uncomfortable. He places the shocking, the weird, and the visually impressive into this quiet, yet tense atmosphere - and the result is truly unusual for this genre, yet effective. If you like experimental horror and aren't put off by the lack of any pacing, you should definitely give this gruesome family story a visit. Worth seeing

Cinema trailer for the movie "Hereditary - The Legacy (USA 2018)"
Loading the player ...