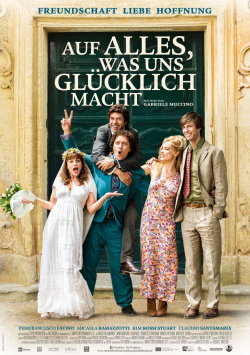 Here's to everything that makes us happy

Since childhood, Giulio (Pierfrancesco Favino), Paolo (Kim Rossi Stuart) and Riccardo (Claudio Santamaria) have been best friends. Then, when Paolo fell in love with his classmate Gemma (Micaela Ramazzotti), she too became part of the inseparable clique. But as life goes, they all went their separate ways as they entered adulthood. It wasn't just their professions or personal strokes of fate that separated them - the feelings that Giulio and Paolo both had for Gemma also causes the former friends to fall apart. But as the years pass, fate keeps bringing individuals of them back together, until one day there will be a very big reunion of the entire clique...

"On Everything That Makes Us Happy" is the new film from Gabriele Muccino, who after his quite successful foray into Hollywood (including."The Pursuit of Happiness") with the feel-good film "It's Most Beautiful at Home" he was able to land a real hit with the public in his home country of Italy. His new work follows on seamlessly from the success of its predecessor. In Italy, the film was able to attract almost 1 million people to the cinemas after the first Lockdown - in the midst of the pandemic, this was an extremely remarkable success. The reason for the success can be found quickly: The film is simply beautiful and caresses the soul - just what is needed at a time like this.

It is not a film that shows us suffering and misery, not one that seeks to lecture us, but one that takes us on a journey through four decades of a friendship as many know it themselves. The friends seem inseparable in their youth, but life has other plans. This is quite normal and therefore understandable for so many viewers. Even if the whole thing may be a little dramaturgically constructed here and there and also exaggerated, one recognizes oneself in many scenes, feels reminded of one's own youth. Of first love, of very special experiences with best friends and of a time when it felt as if the whole world belonged to you.

Working through some 40 years in just over two hours may suggest a fear that the film is rushing through the story a bit. However, Muccino manages very well to make you feel at the end that you have really experienced a lot with the characters and have been intensely involved in their lives. The characters grow on you and you would like to spend more time with them. A beautiful, unagitated film, full of lightness, heart and truthfulness - and exactly because of that: absolutely worth seeing!

Cinema trailer for the movie "Here's to everything that makes us happy (Italien 2019)"
Loading the player ...